Umbrella lining the courtyard of Masjid Nabawi in Medina

I apologize in advance for the less than quality pictures included in this post. Since this was a spiritual journey, photography was not high on my priority list. I actually took very few photos considering I am a blogger on a trip, but the few I did take I thought I’d round up in a post since I’ve been wanting to collect and share my thoughts on the whole experience. 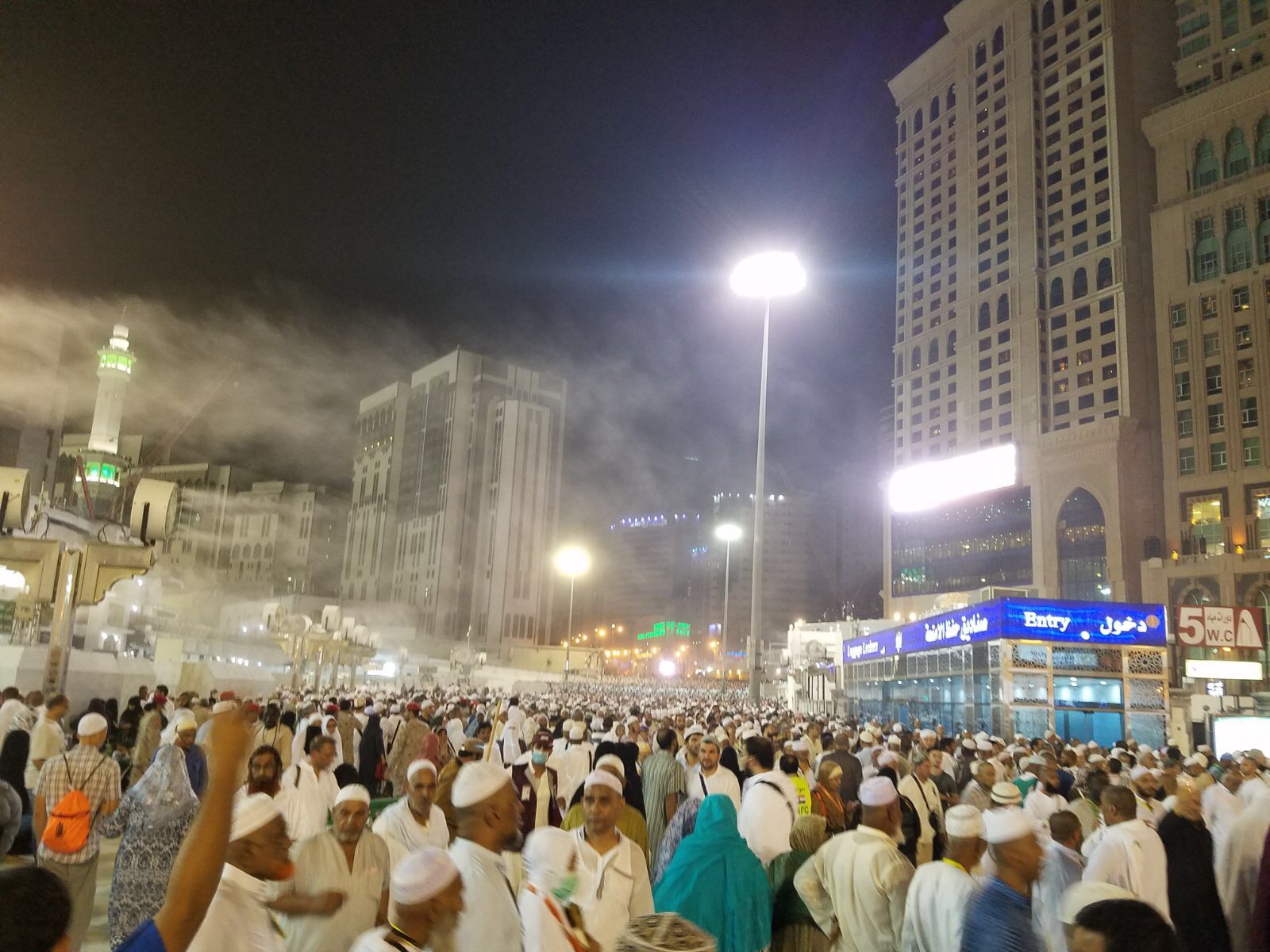 Hajj is a pilgrimage that all Muslims must make once they are financially and physically able to. It is the final of the five pillars of Islam. It is performed between the 7th and 13th of the Islamic month of Dhul Hijjah. Though the actual Hajj rituals last only 5-6 days, the typical itinerary lasts between 2 weeks and 40 days. Mainly because it is customary to visit Medina (the Prophet’s city, where he found a safe haven during persecution) and spend some time in Mecca before the actual days of hajj. 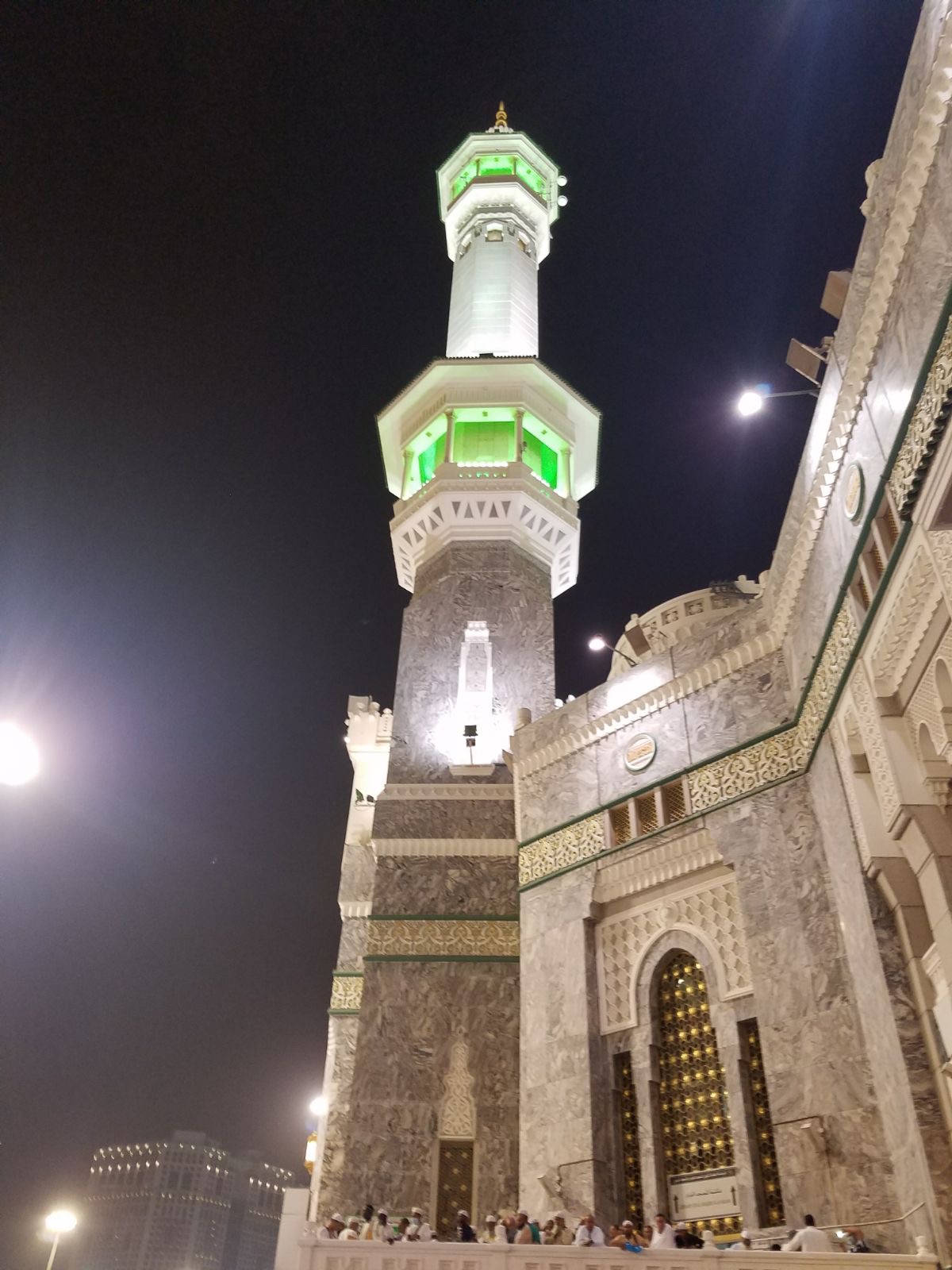 One of the minarets of Masjid Nabawi 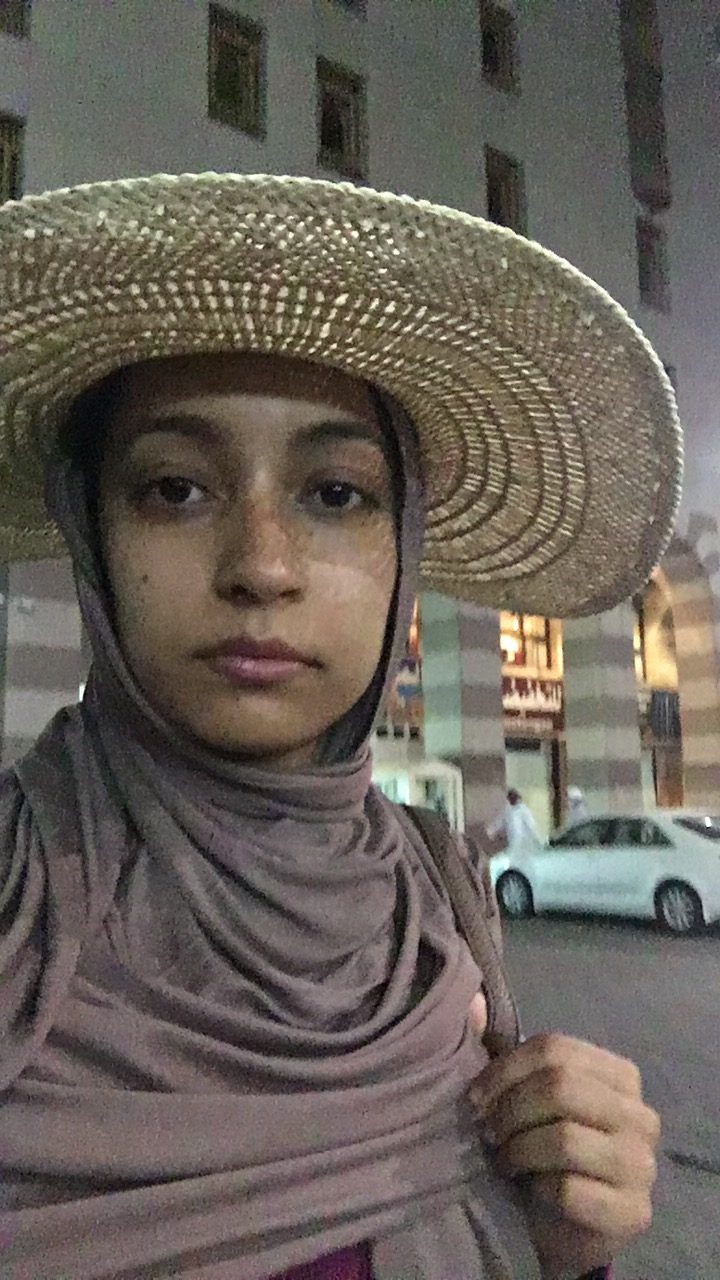 Grainy but OK! Make up free for 3 weeks and it felt amazing! 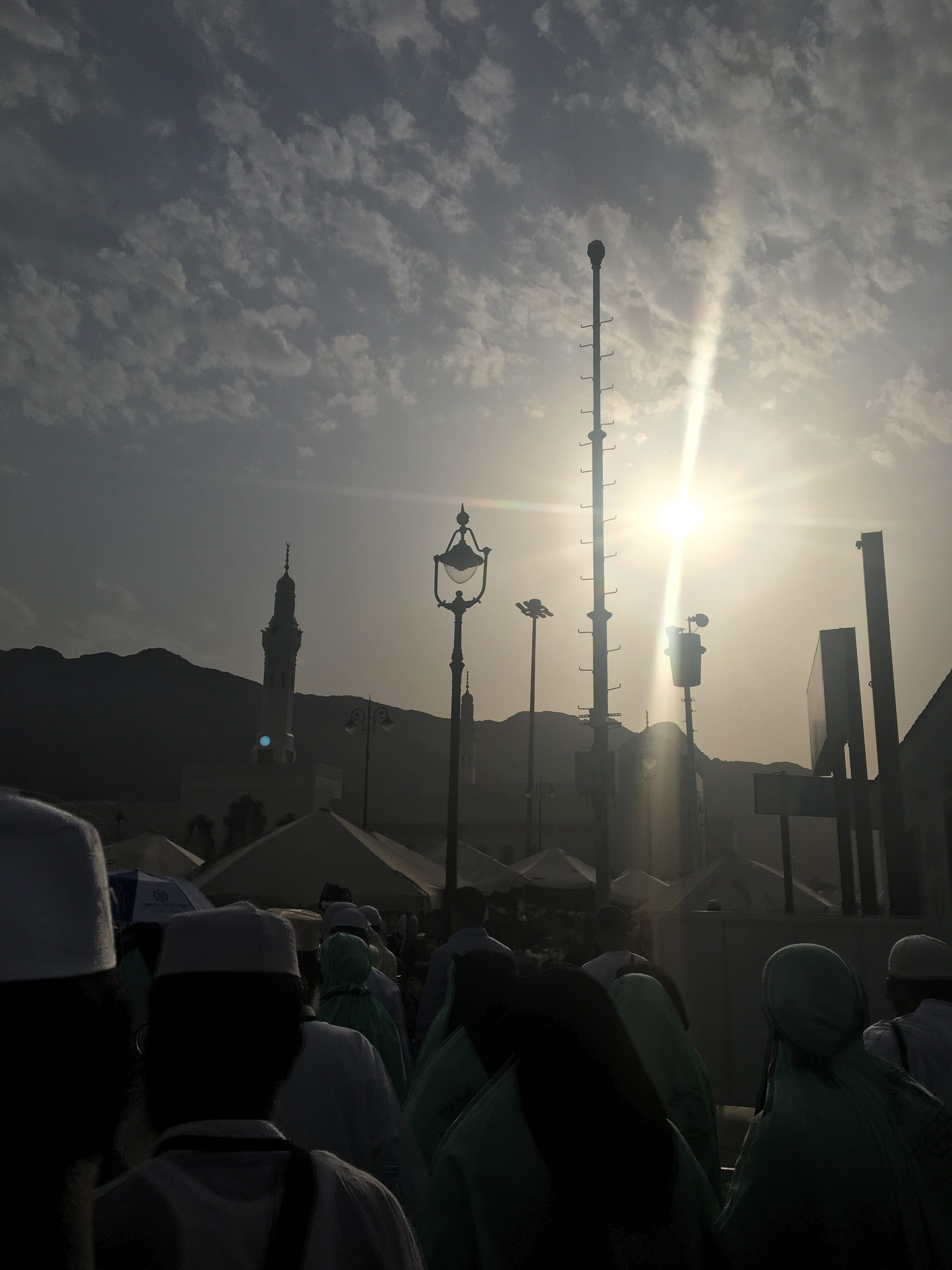 On the way to Mount Uhud where the historic battle was fought and early Muslims had lost, teaching the Prophet and his companions many lessons, one of which: patience. 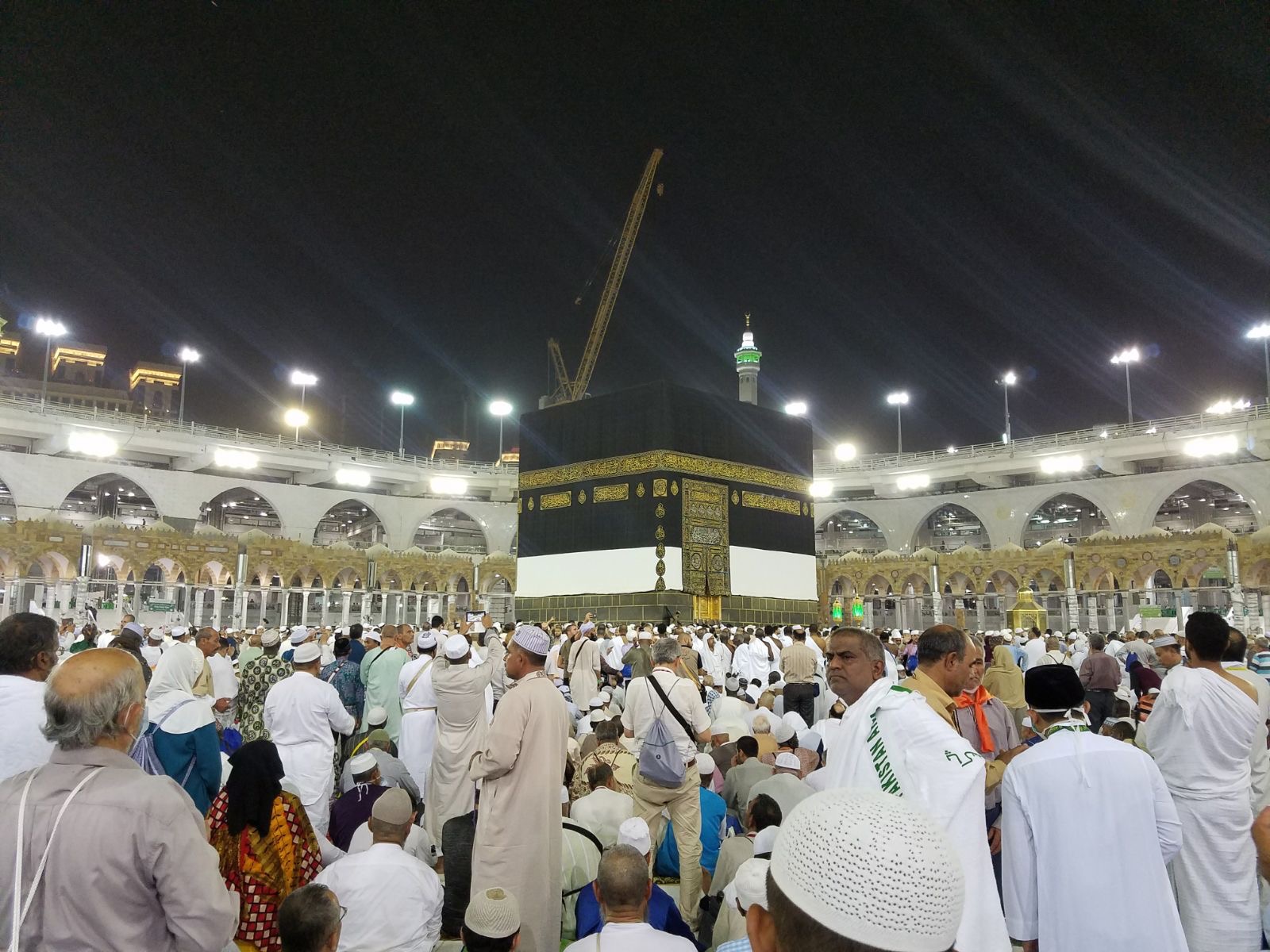 I can’t describe to you the feeling of seeing the Kaaba for the first time. Perhaps it is most similar to seeing your first born child for the first time. You hear stories about it, you imagine for the longest time what it will be like, but when you see it you’re utterly unprepared by the awe you feel. Your breath is taken away. You fall to your knees and cry. You imagine the angels circumambulating the same exact way, perpendicular to this location in the heavens. You imagine all the times you’ve faced this structure. All the times you’ve faced it from afar with fear, with hope, with joy, with pain and it all bundles up and comes pouring out in your tears and your prayers. 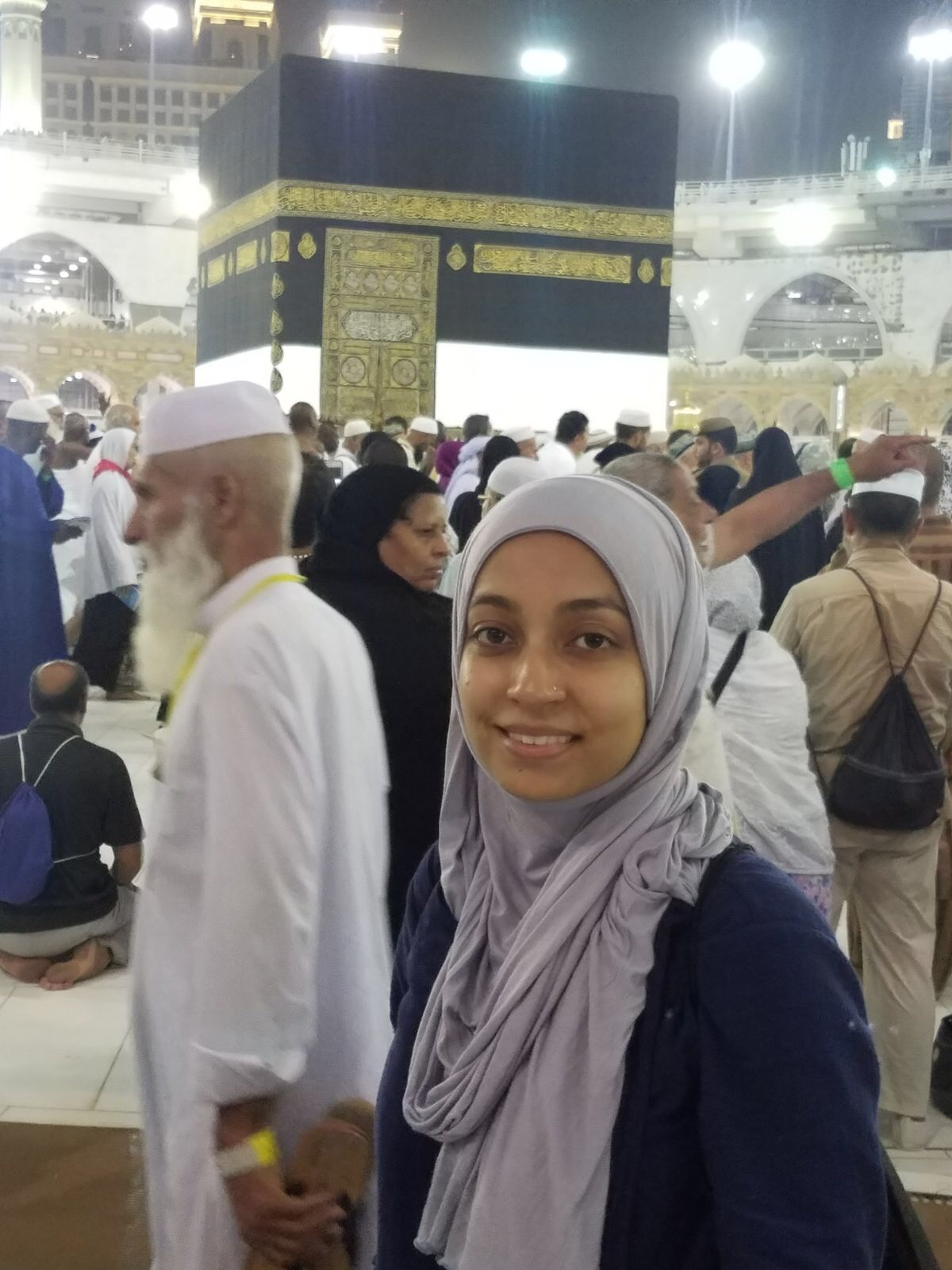 After our first Tawaf or circumambulation of the Kaaba (7 times)

I won’t go into the semantics of hajj, because there are quite a few steps and it can be overwhelming, but I will include the following:
you have to complete a few tawafs (circling the kaaba)
running between the hills of Safa and Marwa (aka sayee)
staying in a tent at Mena for a few nights (a 10sq mile camp site housing 2 million pilgrims)
making supplication in Arafat (the site of the Prophet’s last sermon, and Abraham’s historic sacrifice)
overnight stay under the night sky (no tent, no nothin) in Muzdalifa
stoning the jameraat (the site where Ibrahim threw stones at Shaytaan for trying to deter him from his mission) 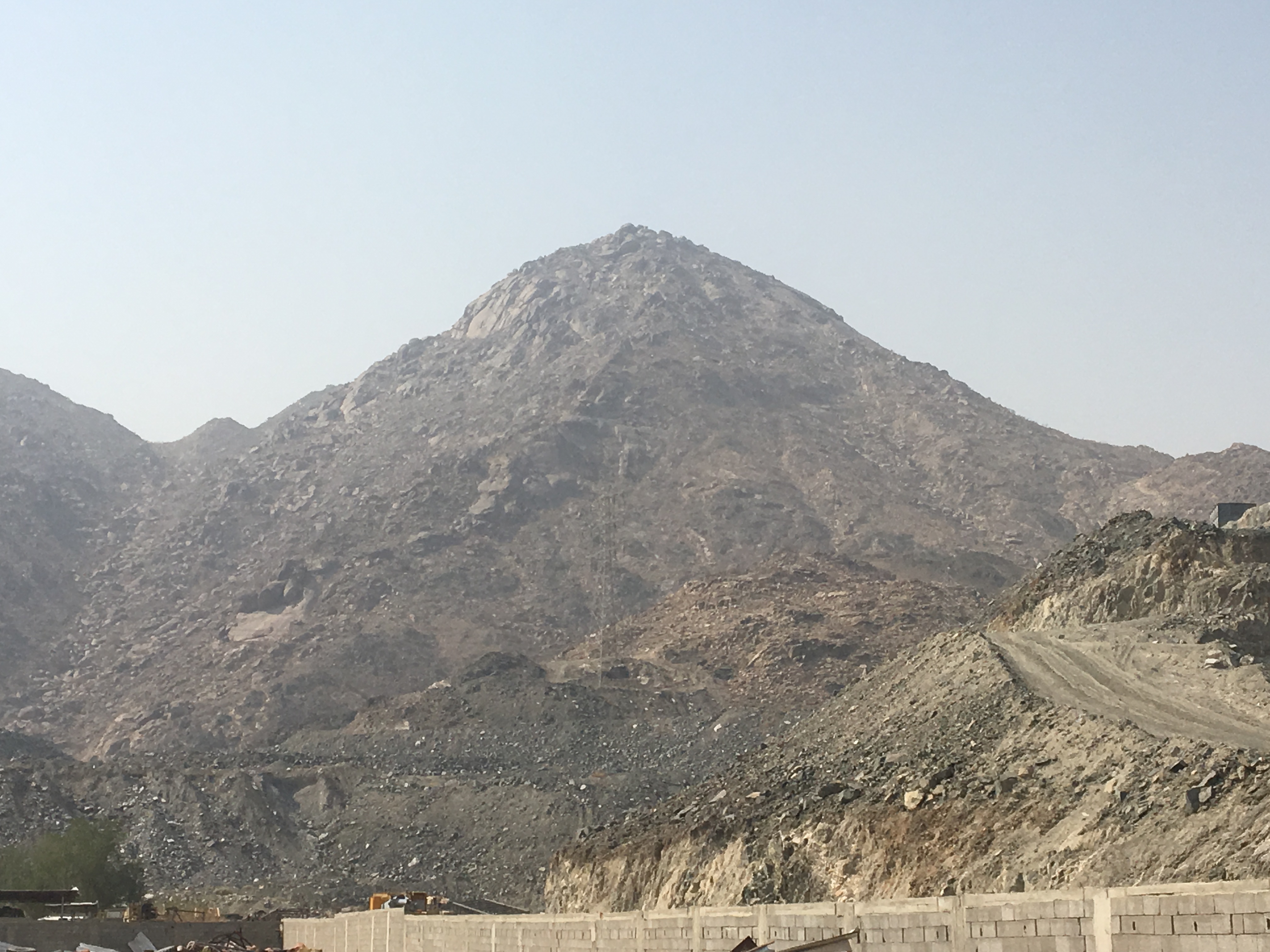 High up on this mountain is the cave of Thawr where the Prophet (peace be upon him) hid from his enemies who were deterred by the sight of cobwebs and a nesting bird who appeared miraculously.

The first thing they tell you to prepare you for Hajj is Sabr or patience. You strive to stay calm and collected through the heat, the crowds, the long waits, the discomfort, the homesickness and the ailments. Honestly, none of those things tested me too much. The group I traveled with, Dar Es Salaam, kept us very comfortable (with a few exceptions). 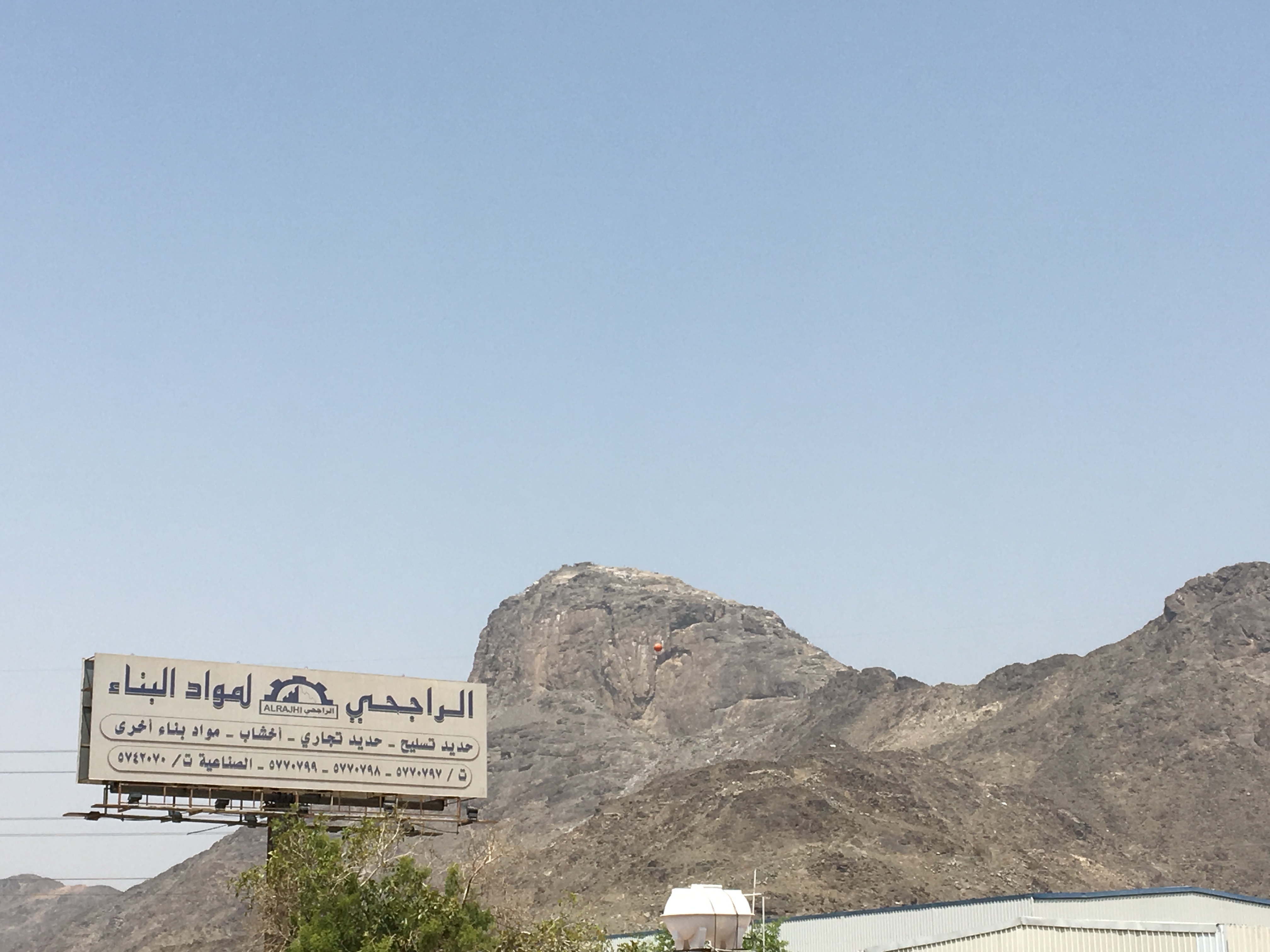 Mount Hira, where the Prophet Muhammad would go up to meditate. His wife at the time, Khadjiah (RA) would meet him halfway to bring him food and water. This was where the Angel Gabriel revealed the first verse of the Qur’an. “Read” or “Iqra” in Arabic, he said. Muhammad (SAW) replied, “I cannot read” for he was illiterate. Gabriel repeated, “Read” and he once again replied “I cannot read”. This exchange happened 3 times until Gabriel started reciting Surah Al’Alaq, “Read in the name of your Lord who has created man from a single clot [of blood]…”

Most of us did our own thing throughout the journey. Once we arrived in Mena though, that changed. We were in huge tents lined with pull out one seaters placed one after another. Personal space was limited to a 2x6ft area. I never felt such a strong bond of sisterhood. Many of us younger women left behind similar aged children at home. We were dealing with missing them, dealing with the fatigue of our journey, the overarching questions of how to maintain our good deeds once back home and instilling good values in our children. The older aunties reminded me of my mother. There were so many opportunities to help them – getting them water or tea, mixing up electrolytes when they got sick (many people got dehydrated), etc. 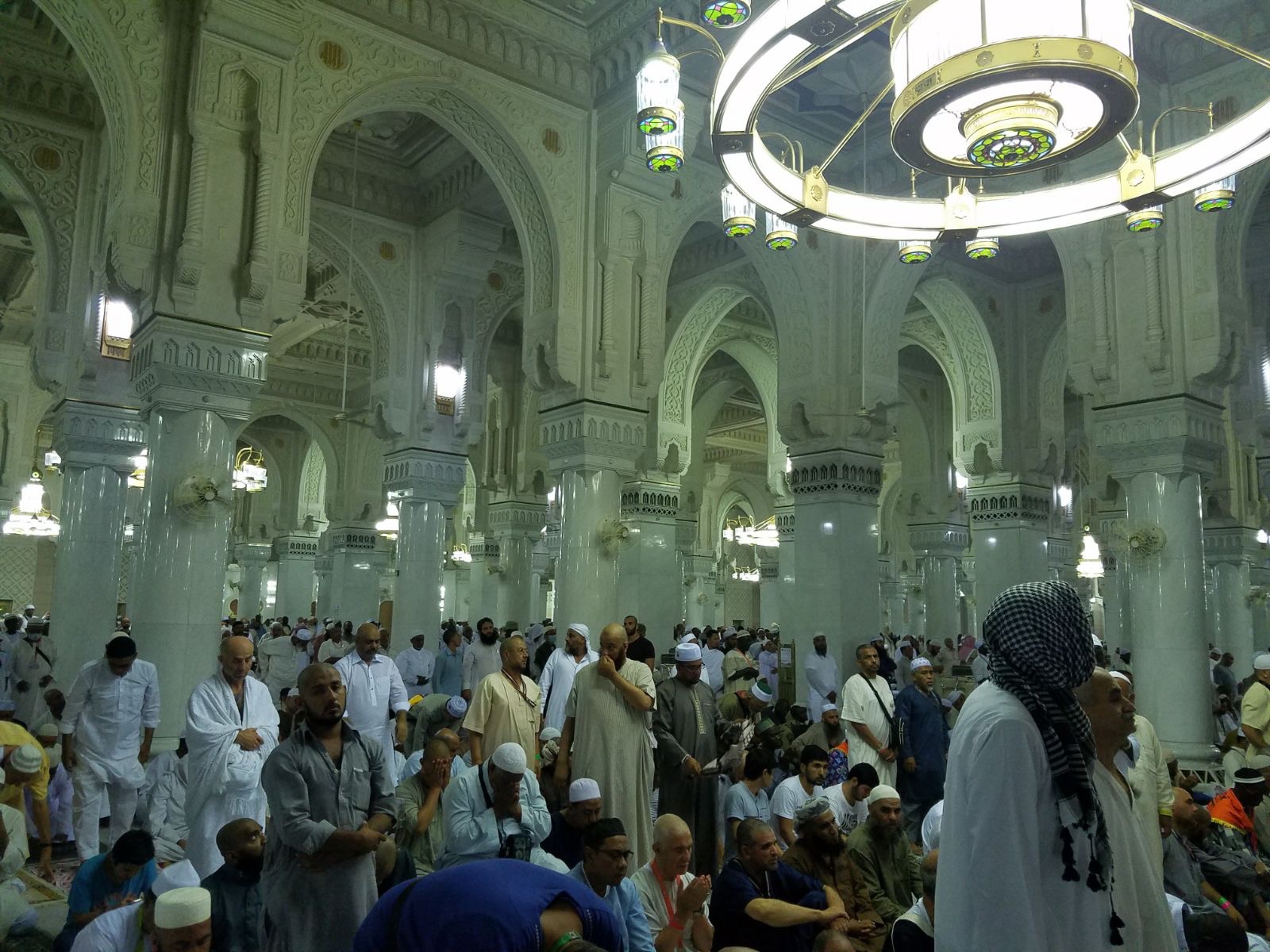 The focus on increasing your good deeds was such a transformational point for me. Every time I helped someone out, I saw someone else that was doing it on a monumental scale. There were the sisters who brought their elderly moms, pushing them around in wheelchairs, getting them food, taking them to the bathroom. Husbands caring for ailing wives. Parents tending to their adult disabled children. It was a humbling experience. To see others committed to such service. It demonstrated to me the importance and the nobility of serving others. Whether it is a parent taking care of a child, a doctor taking care of a patient, or a worker handing out a water bottle to a thirsty pilgrim – you realize that these are the deeds that will be carried on long after you are gone. 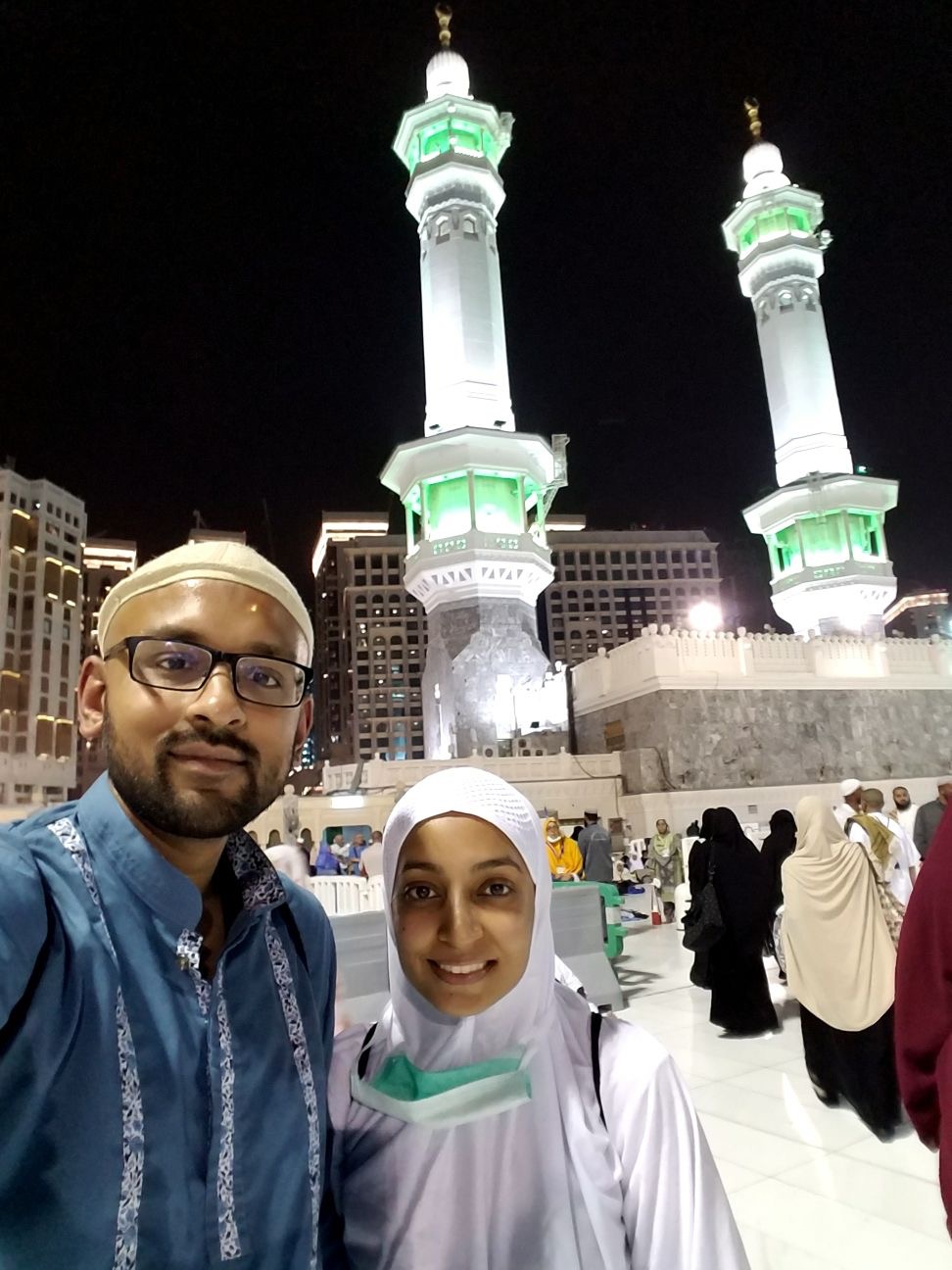 With my baldy. It is customary for men to shave their heads after umrah. And a face mask because when you’re in the midst of so many people, there’s bound to be something contagious in the air! 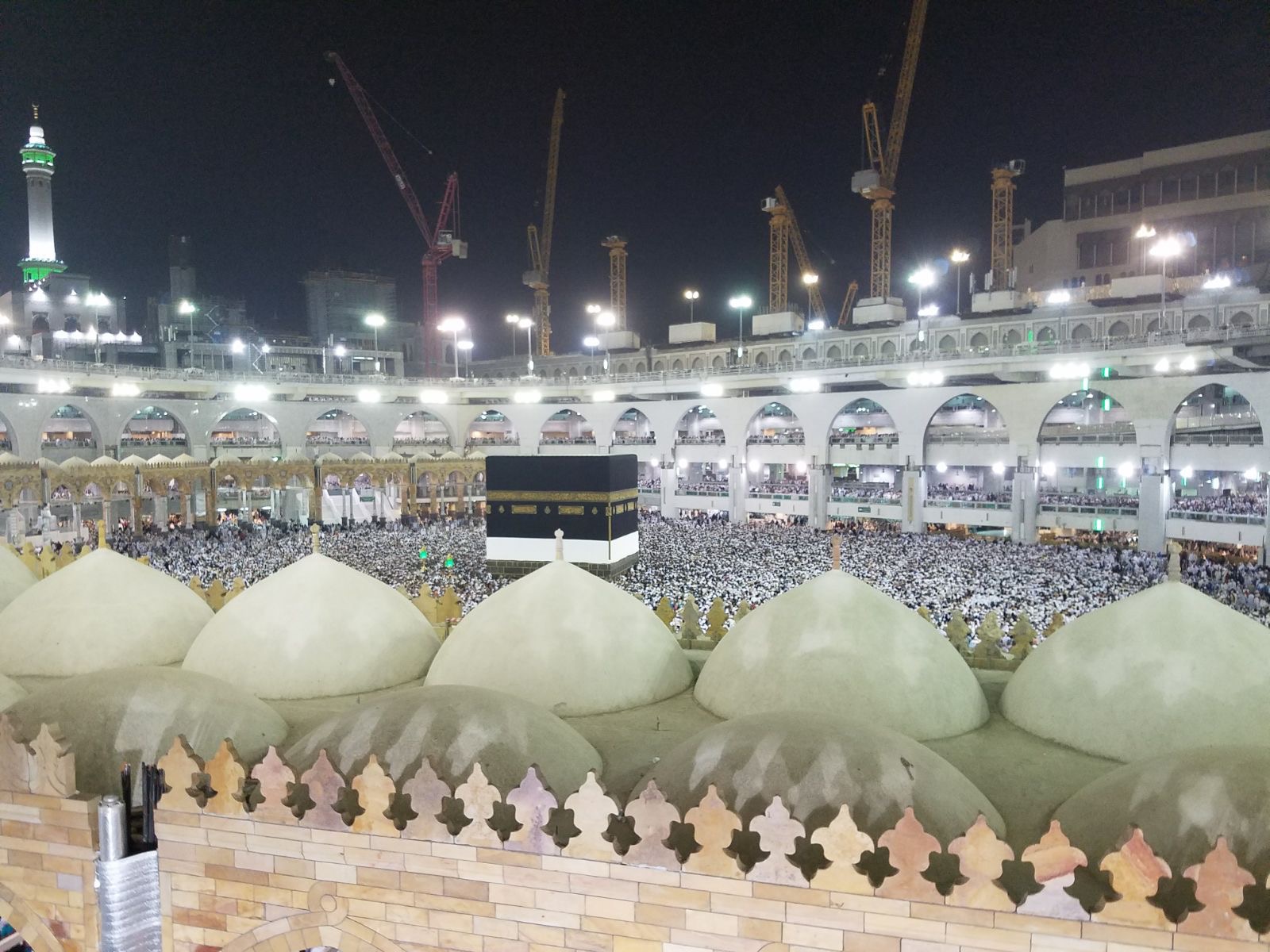 Watching the flow of people circling the kaaba is truly mesmerizing: like celestial bodies orbiting a central mass.

Prior to hajj I was constantly plagued by feelings of inadequacy. Being a stay at home mother while my former classmates were becoming VPs and MDs, I always questioned my path. Whatever path you choose, or is chosen for you, the sooner you make your peace with it, the sooner you can give it your all. 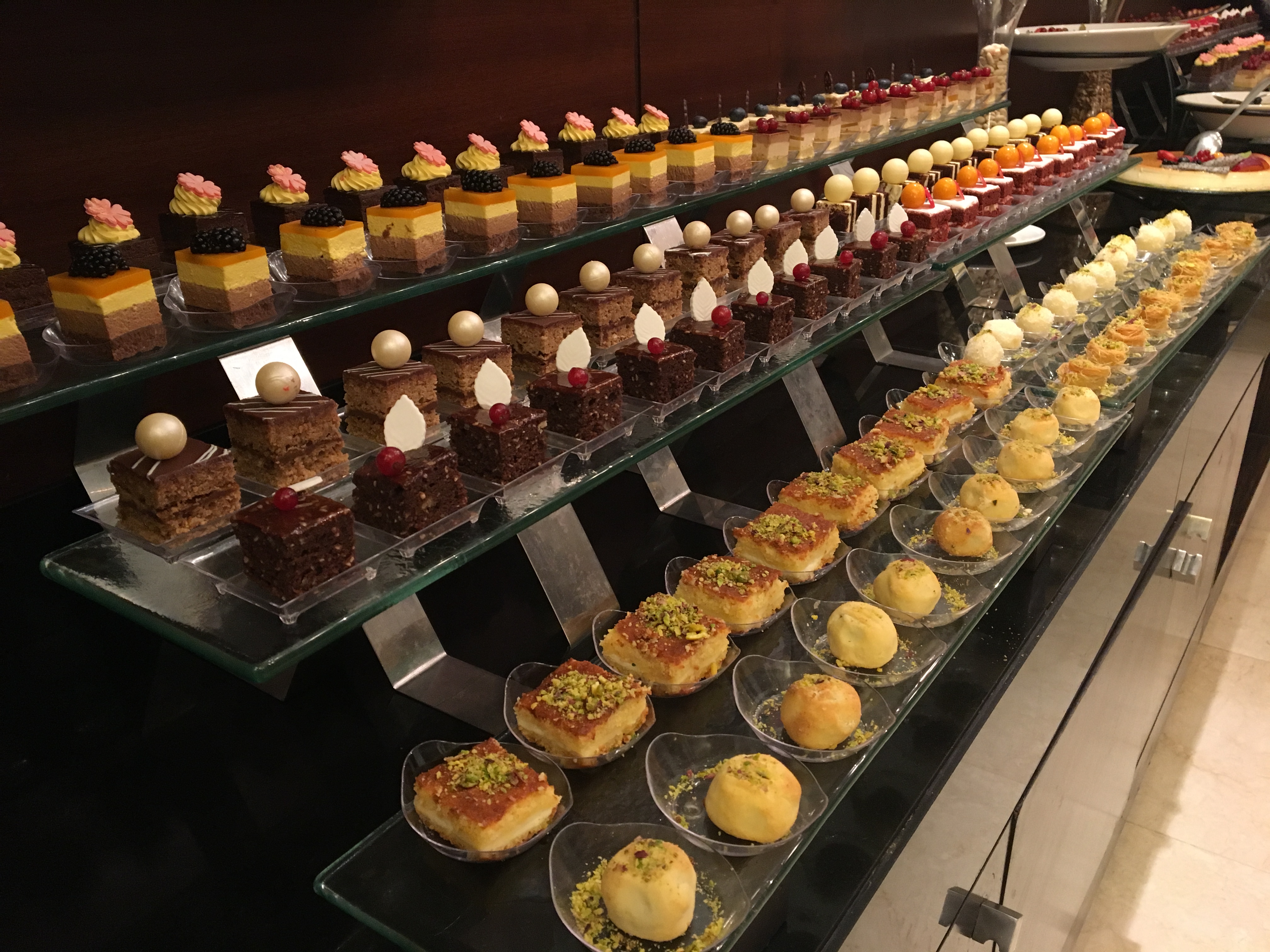 Swissotel really spoiled us. I did not lose any weight during this trip. 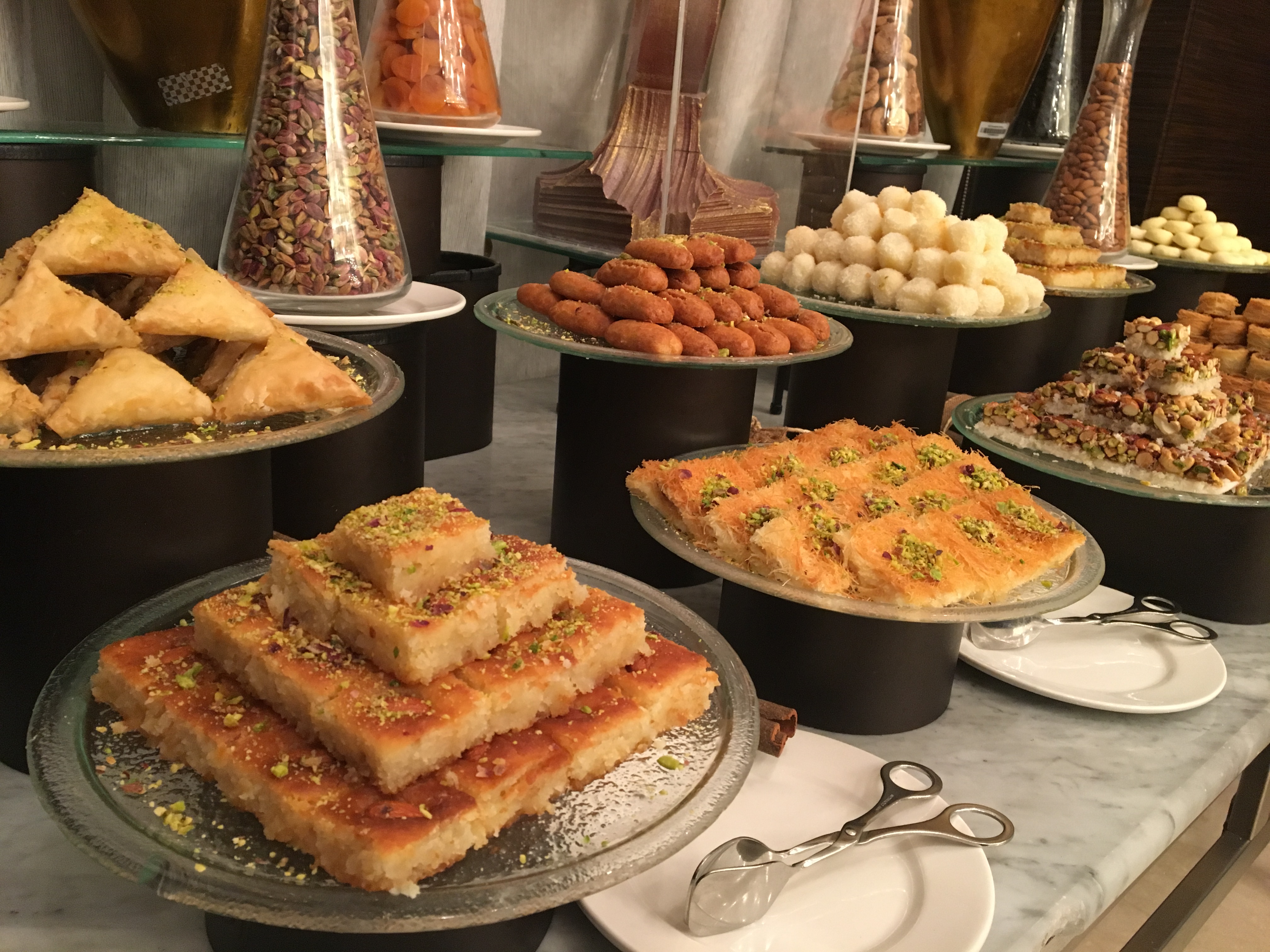 Mounds of baklava and other regional sweets.

Since I’ve gained this clarity of purpose, my cake designs have improved. Now that I view my children as my first priority, and not just getting in the way when I have a deliverable, my focus has improved. I have the energy to stay up late, working on a cake, and tend to a sick child either intermittently or in a few short hours. I am so grateful for this perspective, for this experience, for the lessons I learned. I hope to carry it with me as long as possible. 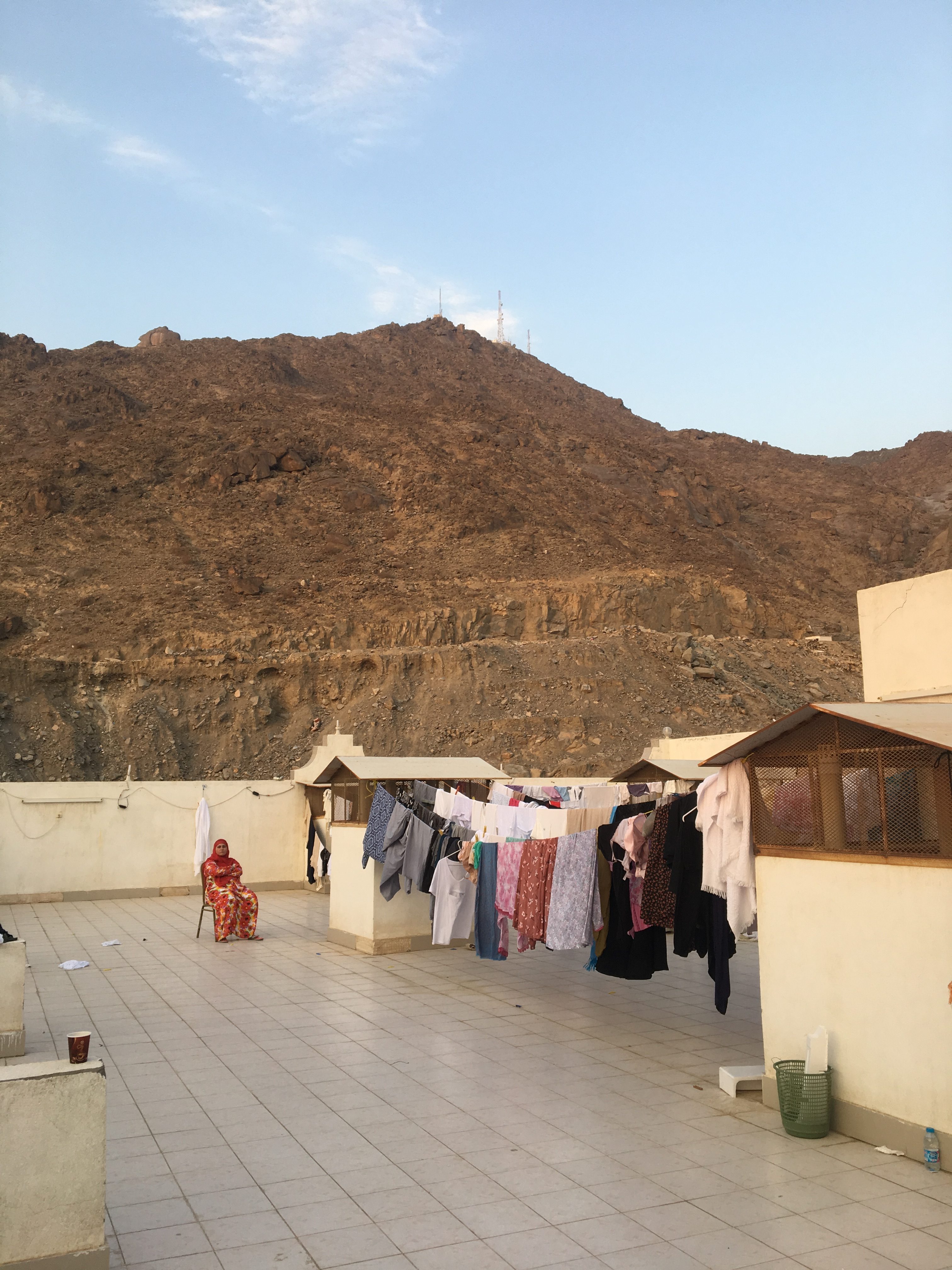 We stayed at Swissotel for a few days to take advantage of the vicinity to the Kaaba, then we were transported to a Meccan suburb for the days leading up hajj, preparing physically and spiritually for the journey. It struck me how mountainous, dry and barren the landscape was. How people lived here for thousands of years, how tough they must have been, puzzles me. We were coddled, air conditioned from point A to point B, fed and hydrated round the clock. How they traversed and inhabited these lands in the intense heat and minimal provisions is beyond me. Pictured here are clothes hung to dry as we took advantage of the washers on the rooftop of our travel group’s building. 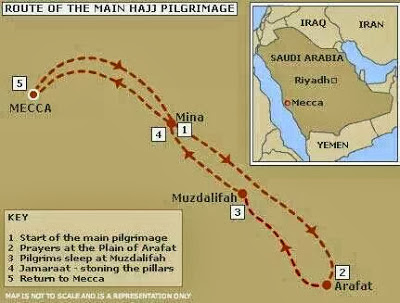 I hope to return to this sacred place with my children. Nothing cements faith like seeing the historic sites that one has learned about since childhood. The convening of so many from around the world engaging in the singular activity of worship is otherworldy. The barren landscapes, the unimaginable hardships our ancestors endured, is inspiring and humbling. 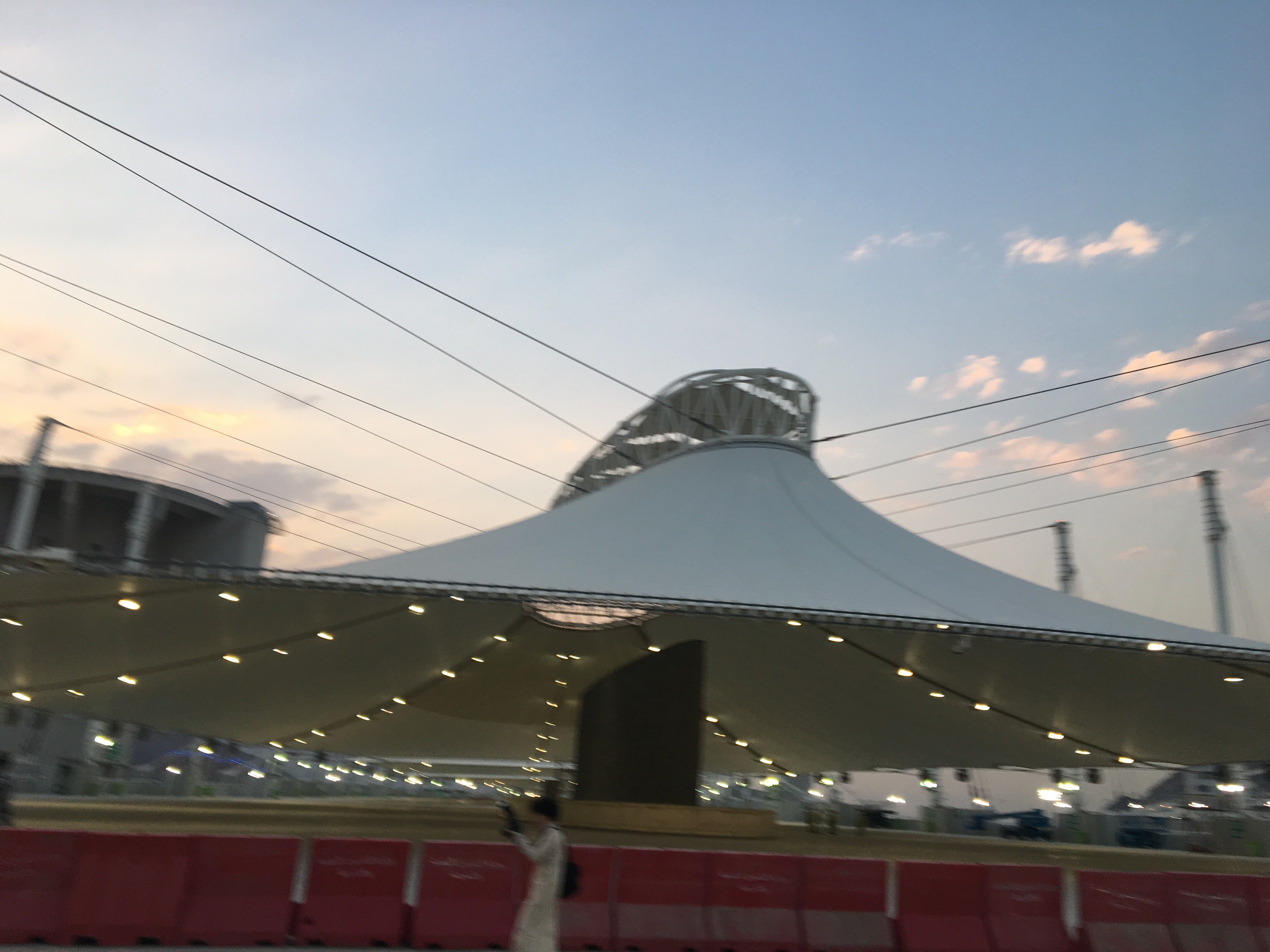 The first Jameraat, or stone wall symbolizing where the Prophet Ibrahim threw stones at the devil for attempting to sway him from his mission. 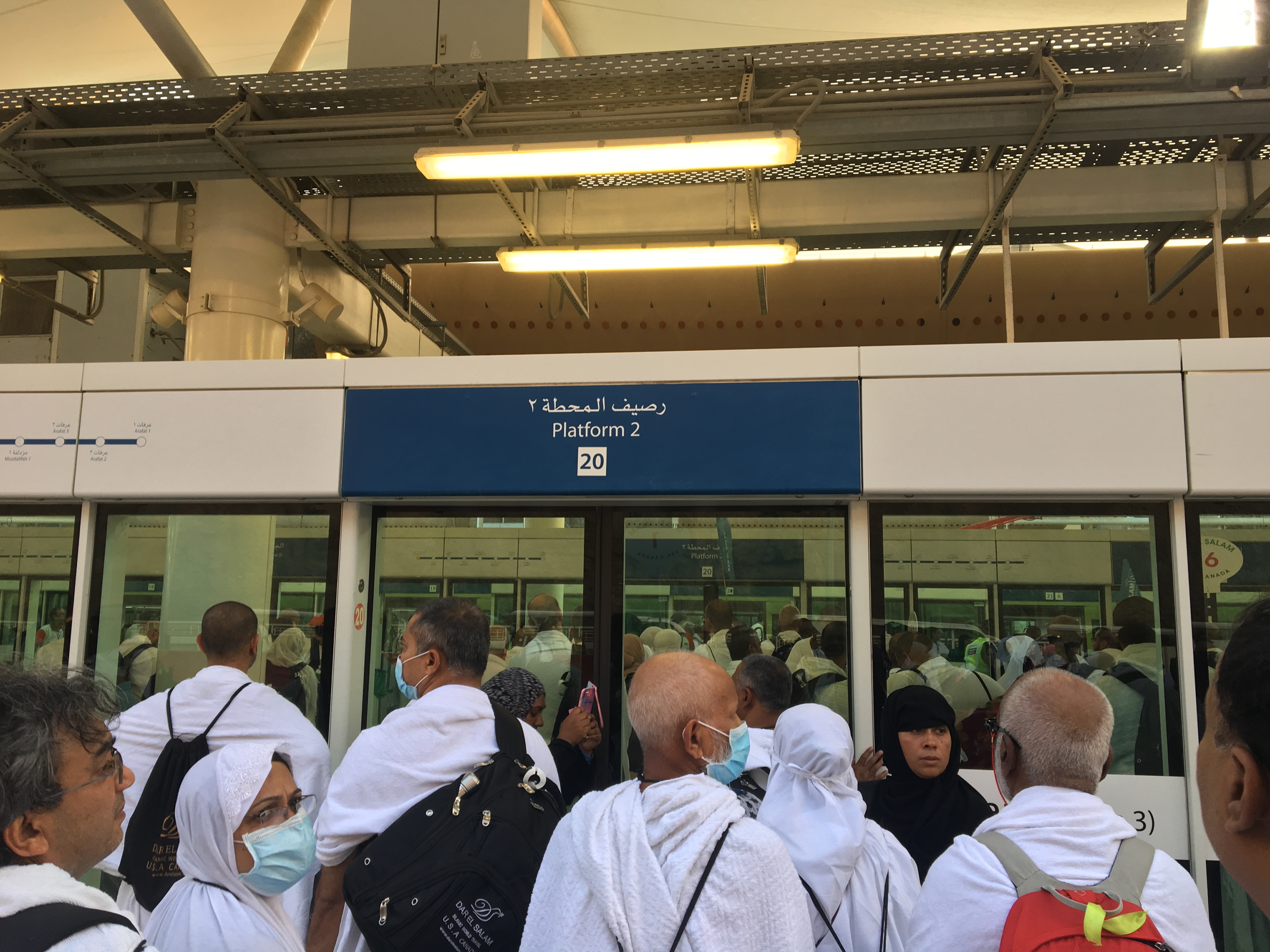 That is all for now. I’ve had this saved as a draft for well over a week. Peep through the rest of the pictures and come back soon! 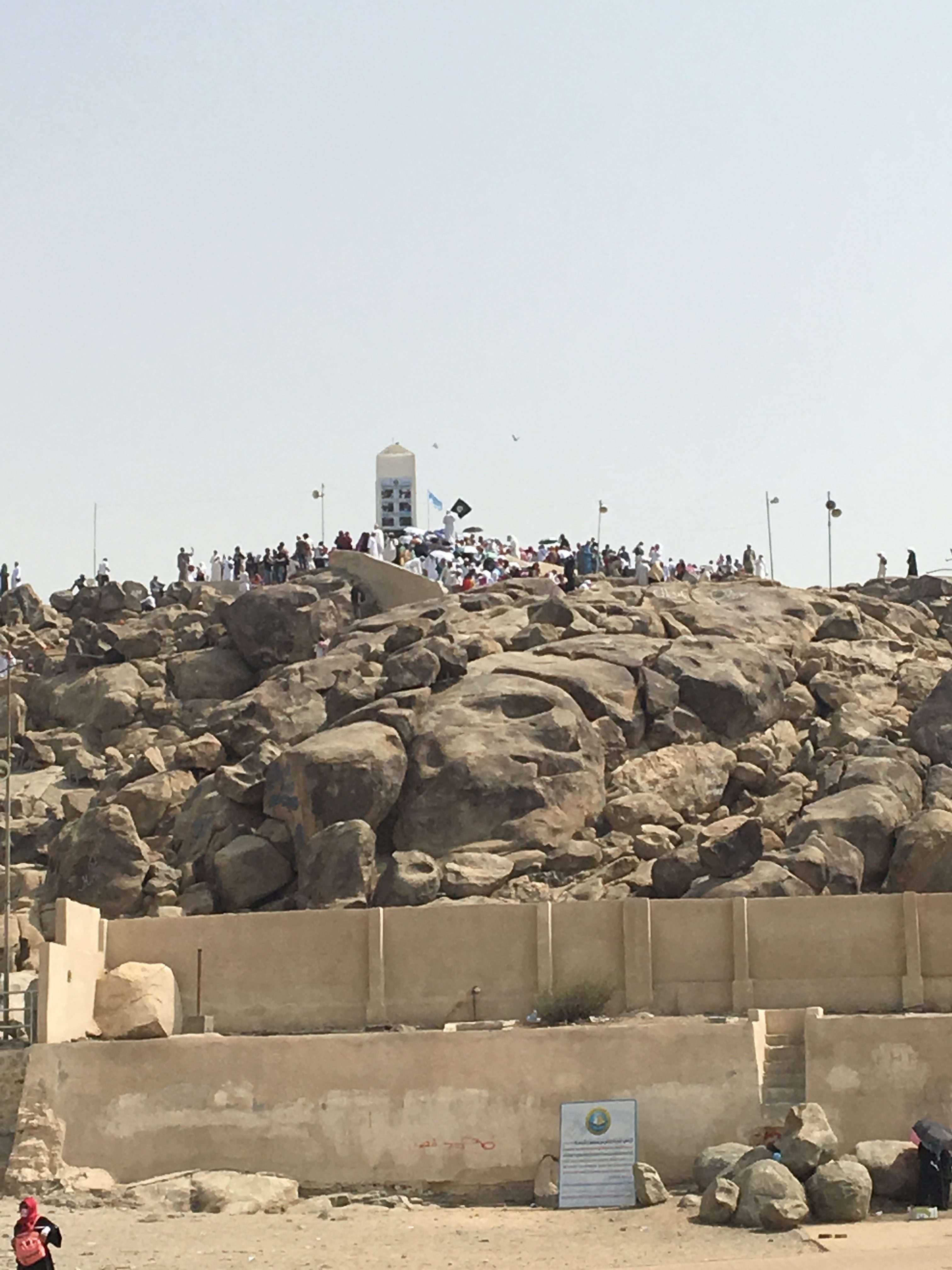 Mt Arafat, where the Prophet Muhammad, peace be upon him, gave his final sermon. Also the place where Ibrahim alaihi wa salaam performed his historic sacrifice. 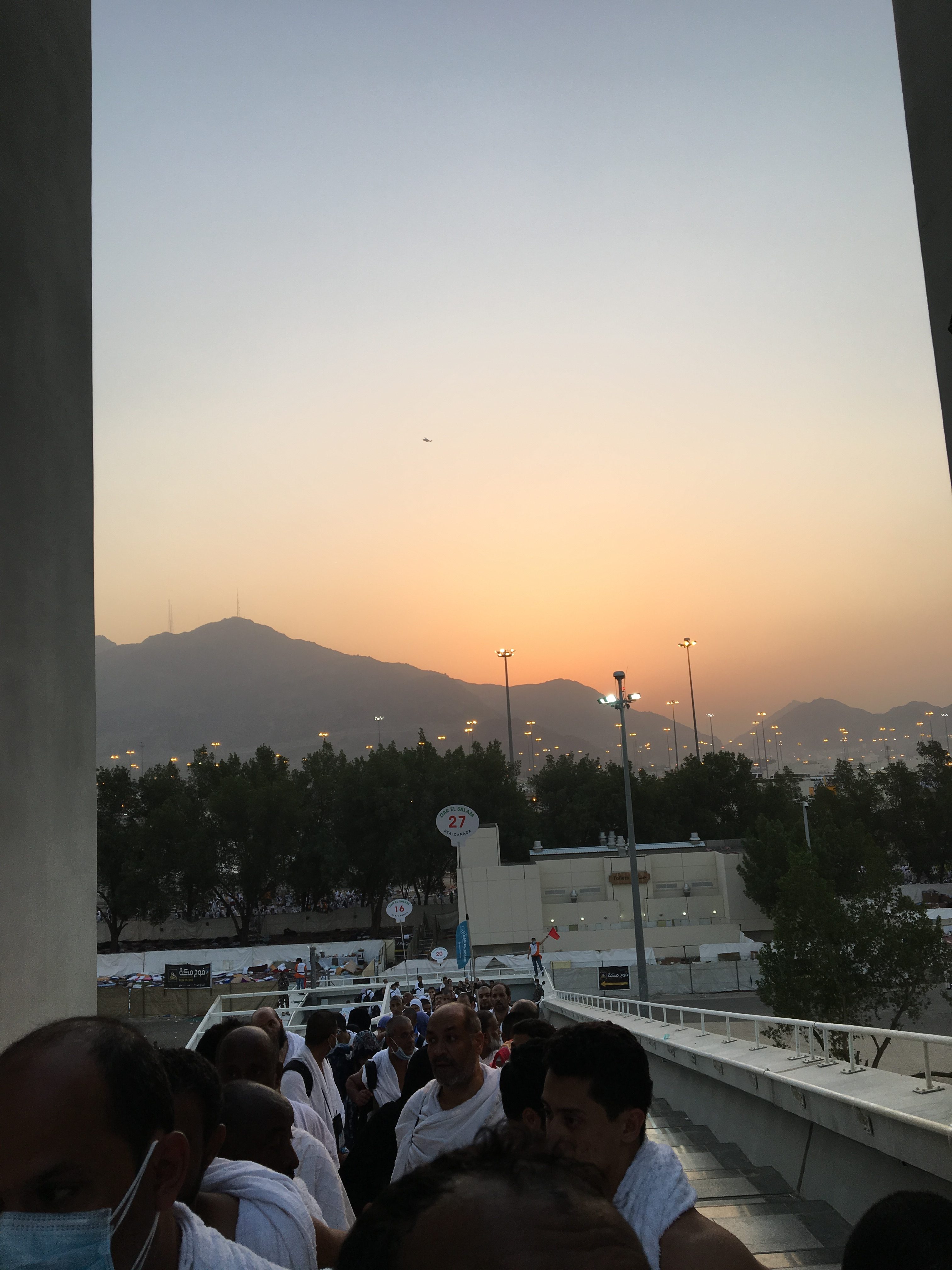 Sunrise as we leave Muzdalifa. You make every attempt to leave at dawn, before the scorching sun gets to you. 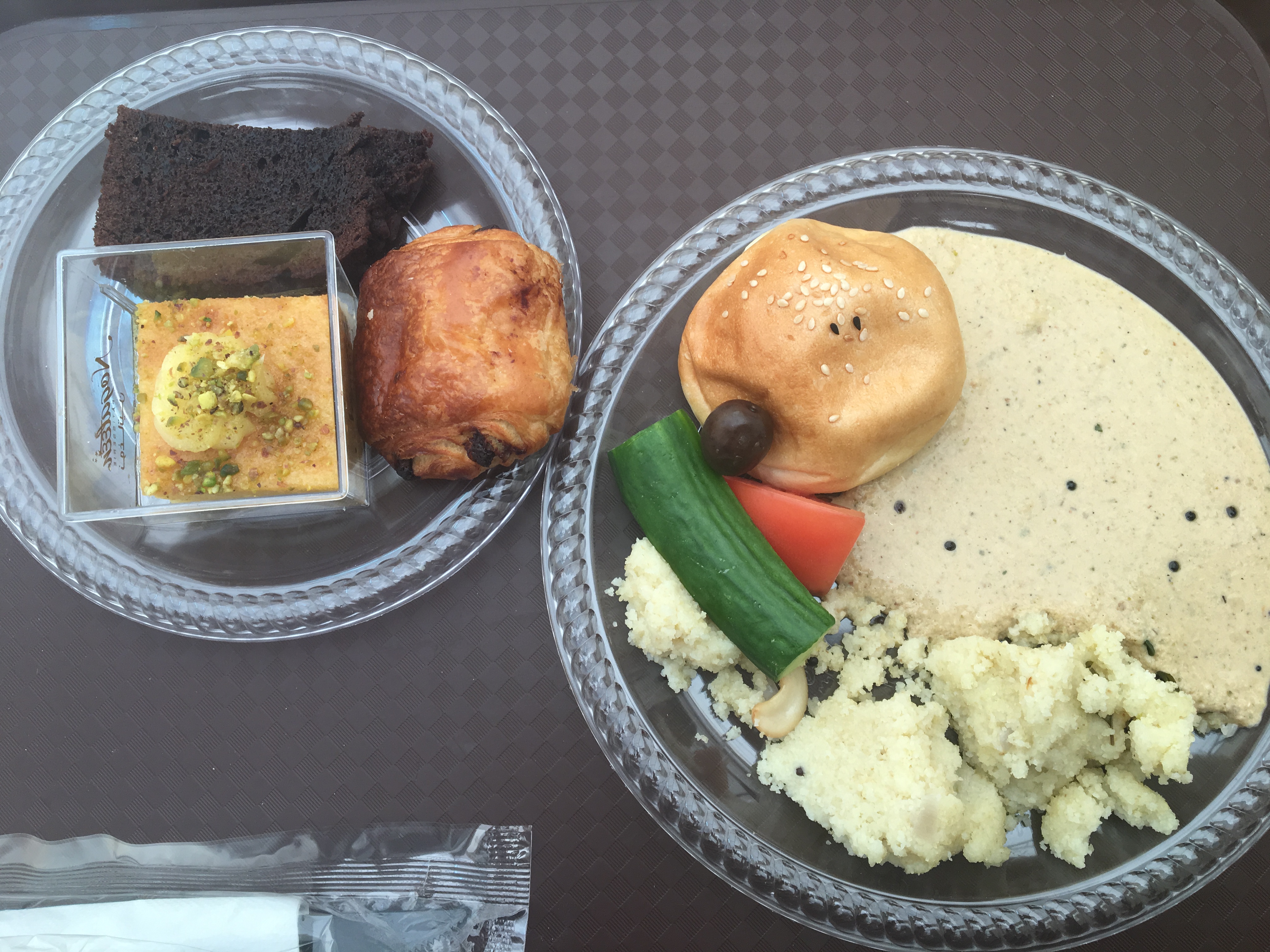 For the morning of Eid, I indulged in some sweets (left). On the right was this delicious Indian breakfast: savory semolina cooked with mustard seeds and bay leaves with a spicy coconut chutney. Yum!! 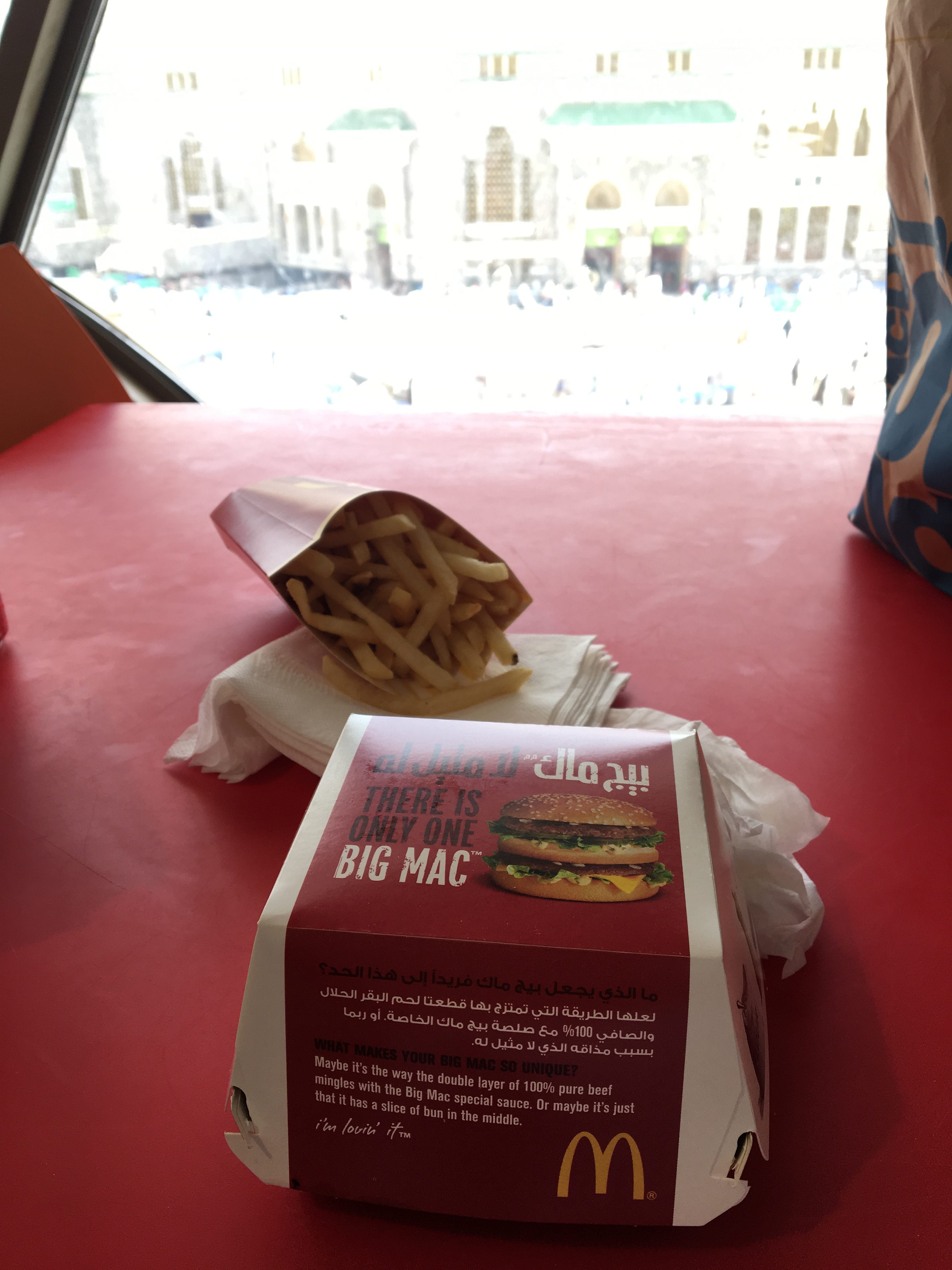 We indulged in some halal McDonald’s once. 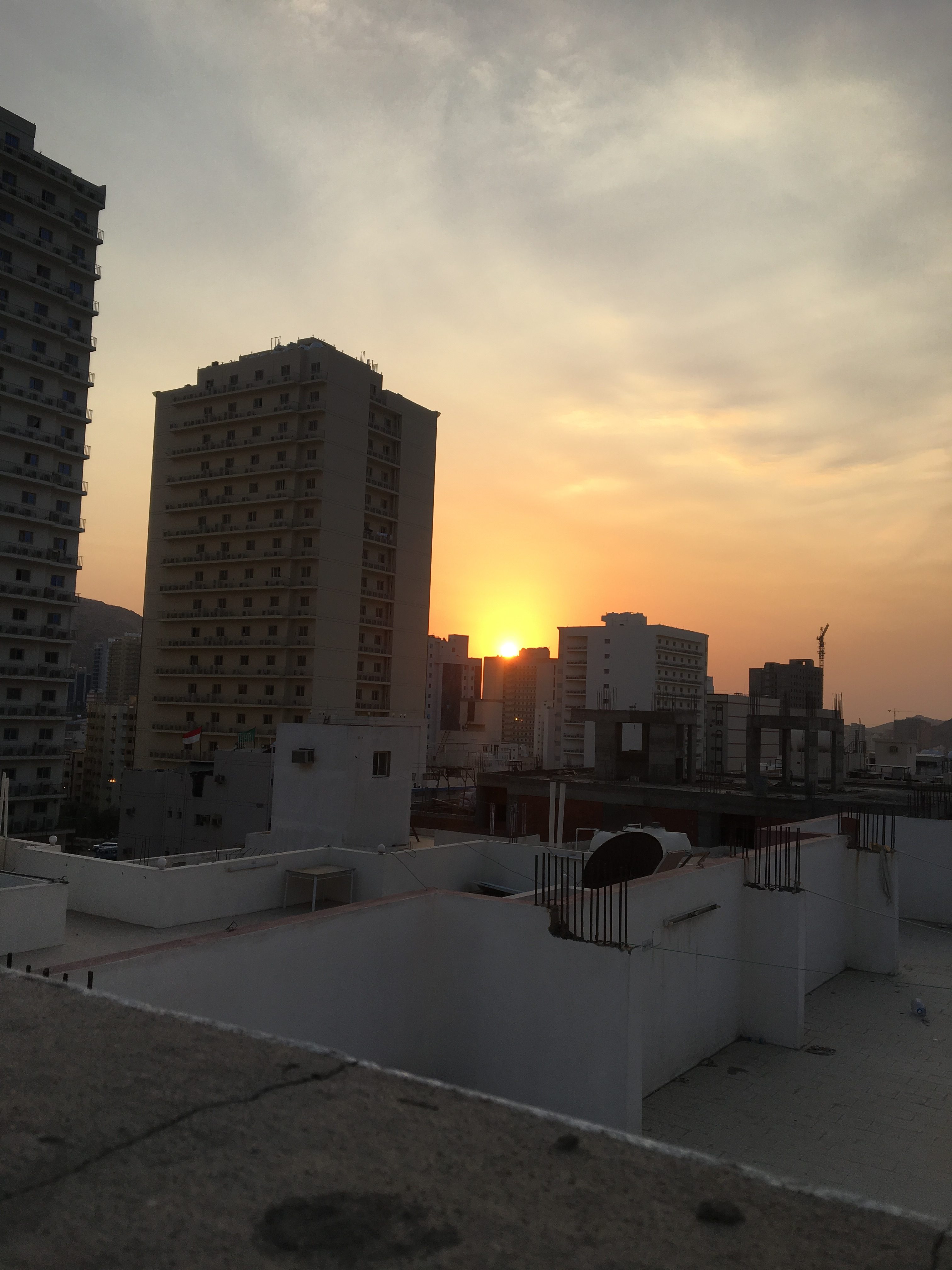 Everyone was up every morning at dawn for prayers. 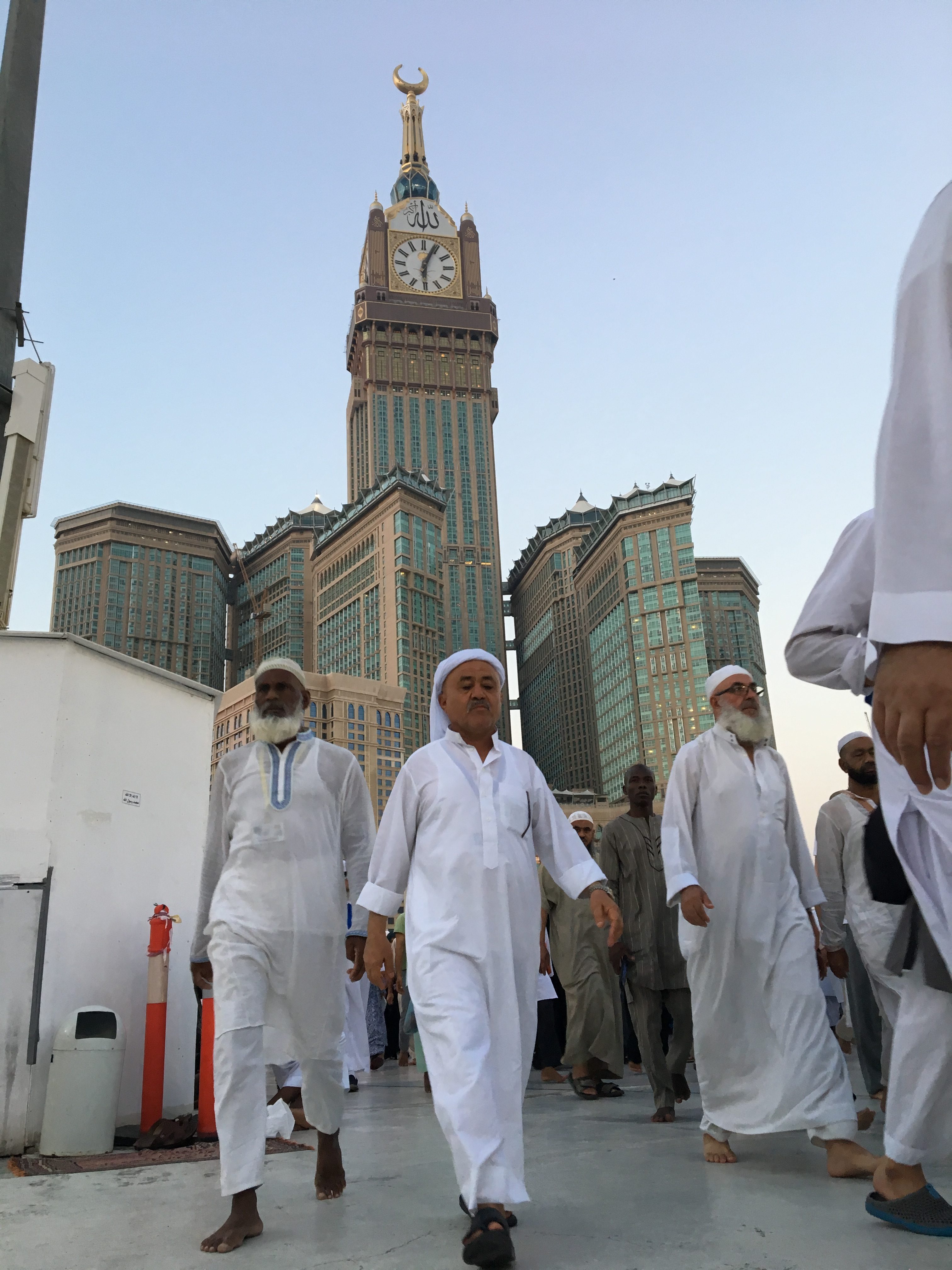 After our last tawaf on the rooftop, I sat down and snapped this picture of the royal clock tower and surrounding hotels that dwarf everything in its vicinity.