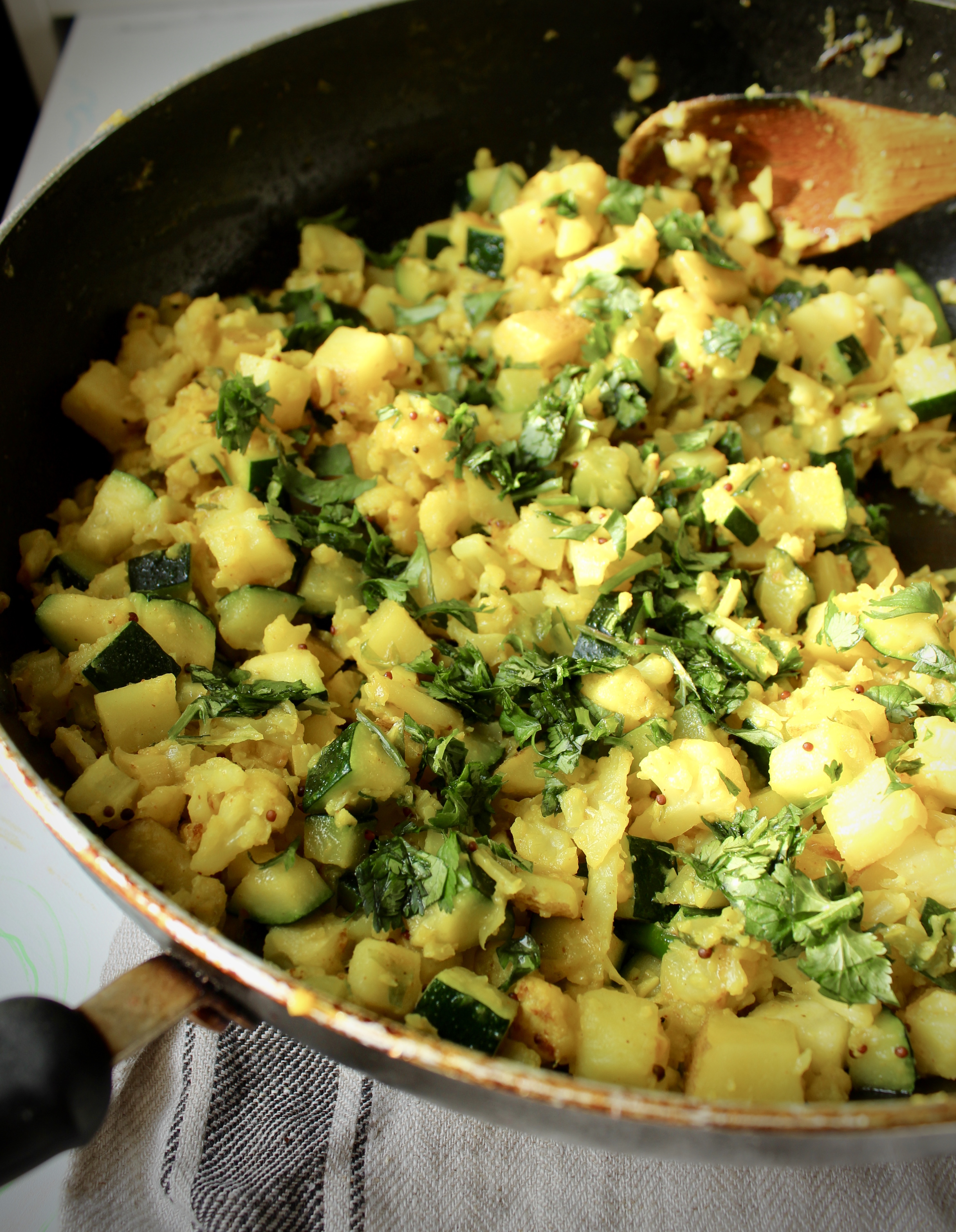 I had to make something vegetarian after my husband made me watch HBO’s Vice the other day. This particular episode was on the industrialization of the meat industry and man was it terrifying. The ghastly amounts of meat we eat day in day out. How the farm-to-table movement is essentially our savior if we want to reap the rewards of our earth in any sort of sustainable fashion. Scary stuff! But we can do our part by 1) supporting businesses like Honest Chops and local farmers market vendors that only source from sustainable farms and 2) eating less meat. There’s a world of protein out there (eggs! chickpeas! tofu!) explore! 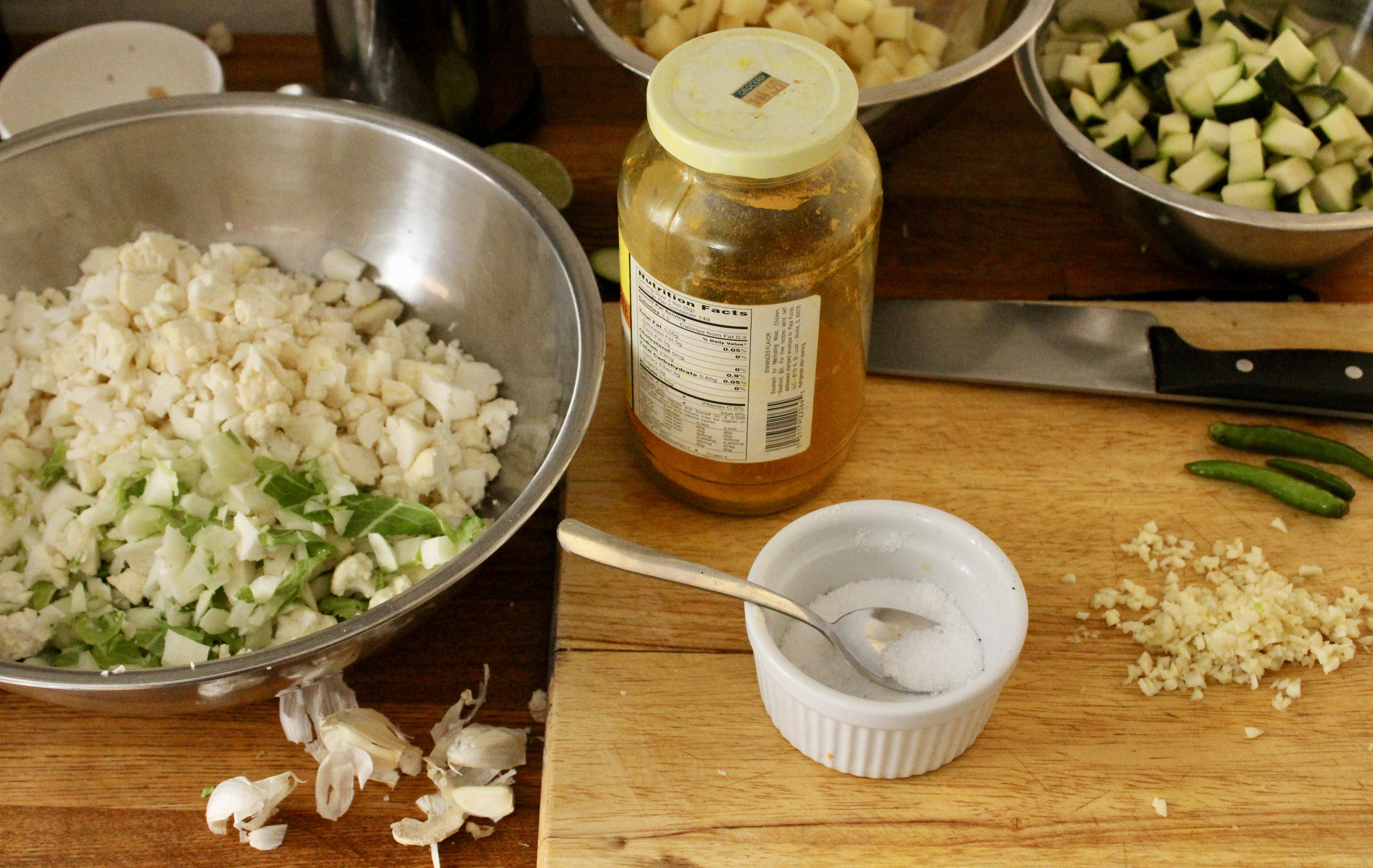 If you’ve been trying to to eat less meat, or just eat/cook more vegetables at home, I’ve summarized some pointers for cooking veggies below. Luckily for you I’ve made so many mistakes when cooking veggies throughout the years I have some words of wisdom to impart, especially when dealing with cauliflower: 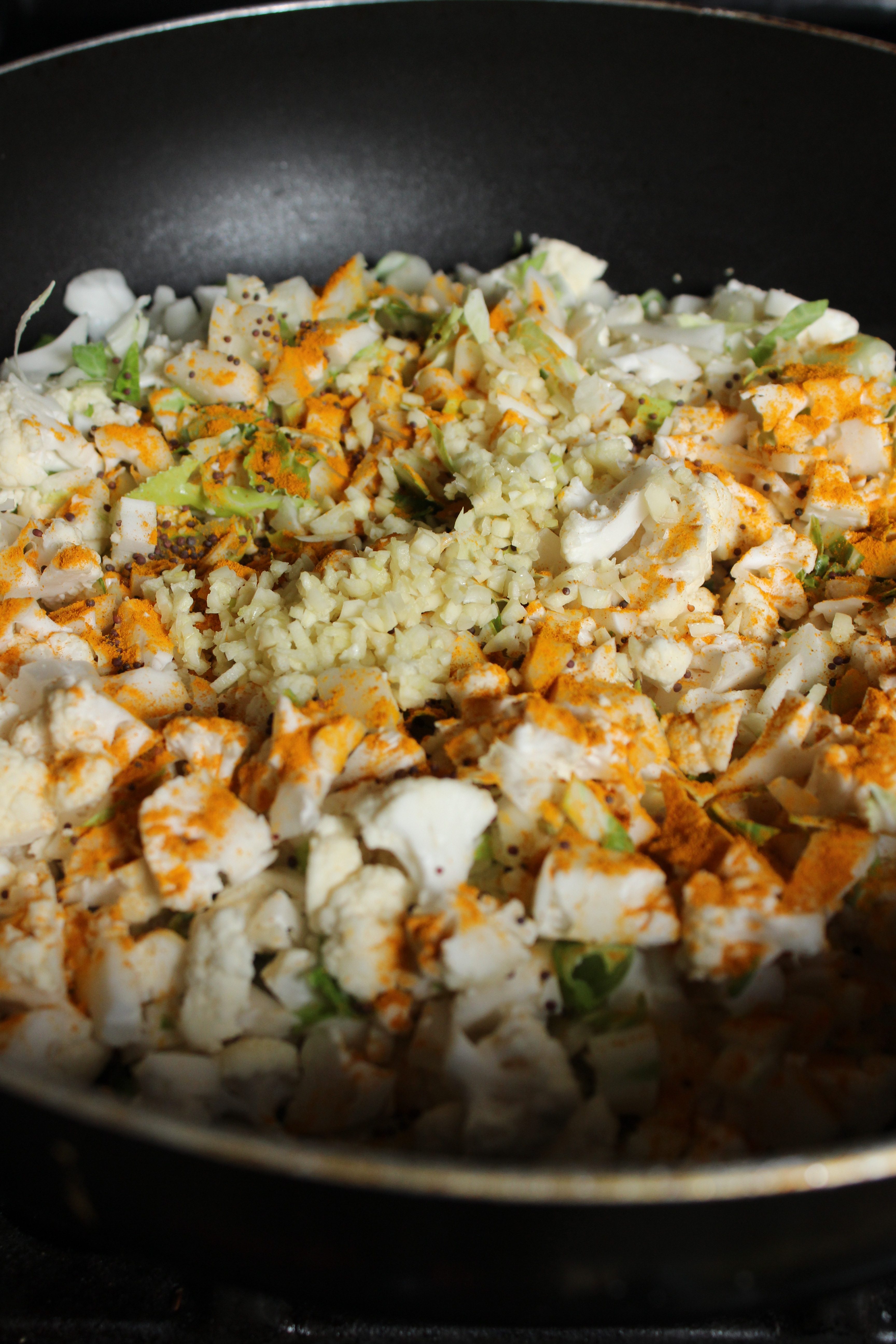 The same guidance I gave for the garlic goes for the mustard seeds. Many recipes will say to first heat mustard seeds or pach phoron (Bengali 5 spice) in oil until they start to pop. Once again, because the total cook time for a stir fry with veggies in this quantity can go over 20 minutes, I wanted to avoid burning any of the elements. 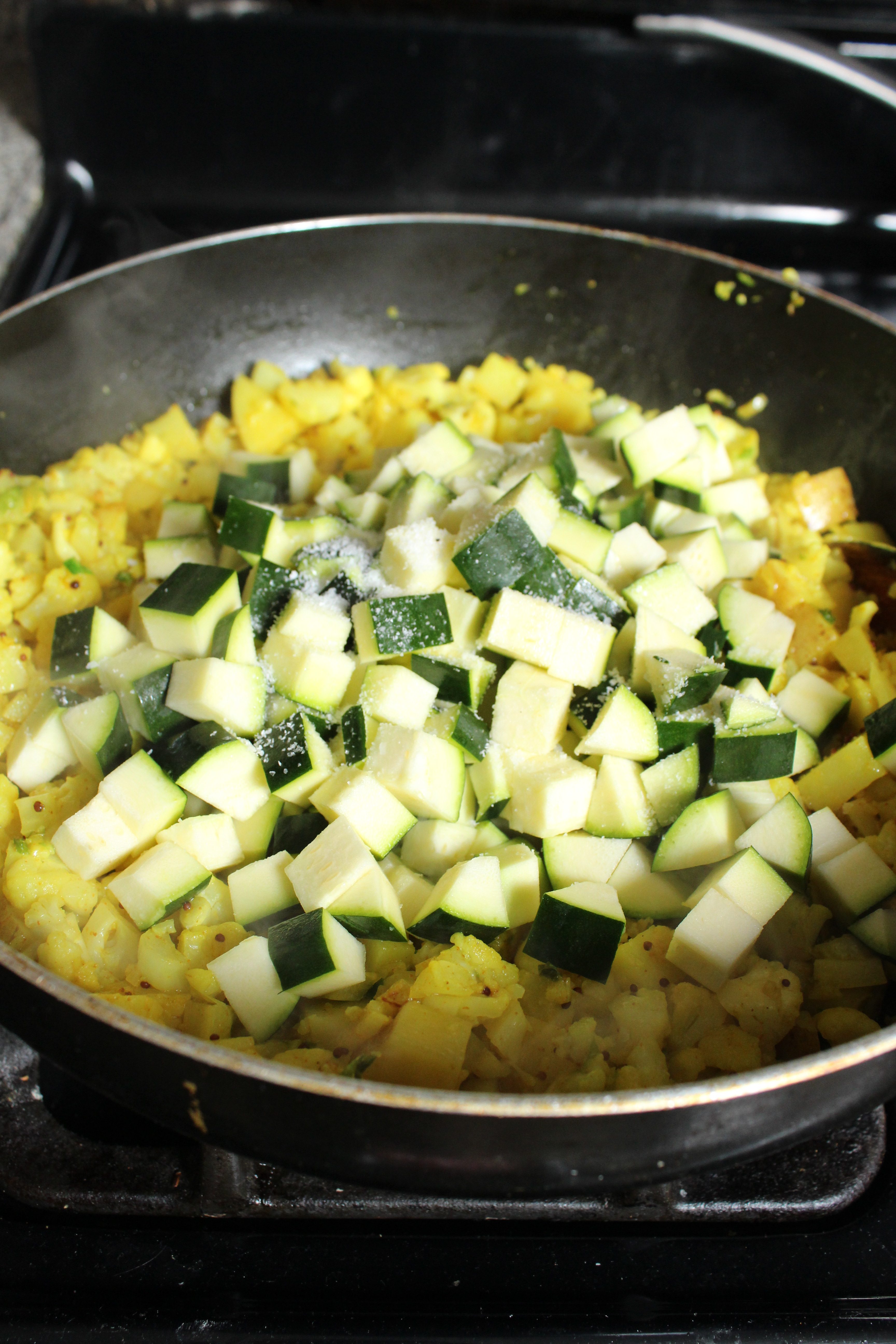 Hope you enjoy this Bengali staple and add it to your Meatless Monday menu. The zucchini at the end can be swapped out for many other vegetables. Growing up my mom would always keep a bag of frozen mixed vegetables, to add to a stir fry like this and really stretch a buck. 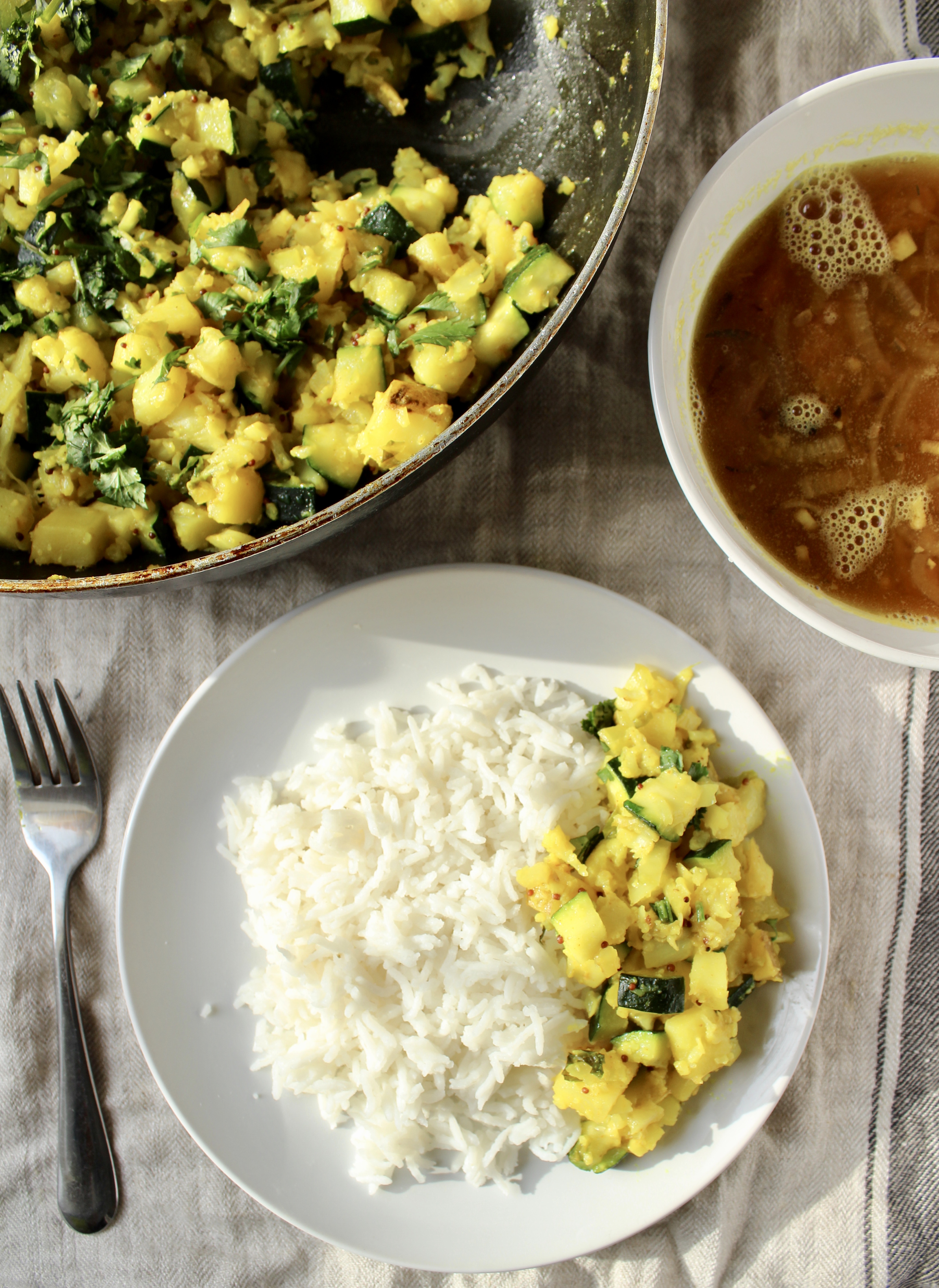 Serve with rice, daal, and any other protein of choice.

When I go to a Bengali restaurant for takeout, I usually overlook the greasy curried meat dishes or the fish floundering in murky masala waters and the bhortas that usually fall short of the homemade version. At most Bengali places, these dishes are laid out buffet style so you know exactly what you’re getting. I usually opt for one of the Biryanis (chicken or goat) and a side of some sort of mixed vegetable stir fry. These things always get me salivating. I guess it’s because they strike a fabulous balance of spice and sweetness. I’m not the type of person who goes gaga for sweet and spicy, but the sweetness in this dish is brought out by the slow caramelization of the vegetables (rather than sugar or honey) and just rounds out the flavor from the usual round up of spices, plus the extra Bengali zinger: pach phorom.

Pach phorom is a combination of five aromatic seeds: black mustard, cumin, black cumin (also known as nigella), fenugreek (methi) and fennel. It can be found at any Indian grocery alongside all the usual spices. They have a licorice flavor, which adds an extra dimension to the dish’s flavor profile. This is important for vegetable dishes that have to compete with a follow up course of a rich meat or curried fish dish.

This is something my mom made at the beginning of the week to just last the course of the whole week. It starts out with a base of softened onions, spices and garlic/ginger paste. You can play around with the vegetables to add your favorites, but to start, I used the two vegetables I found consistent in most Bengali mixed vegetable dishes: cauliflower and cabbage. Now, the two put together makes A LOT, so make sure your wok or pot is large enough to accommodate everything. I had to add the vegetables slowly, allowing some of the cabbage at the bottom to wilt and decrease in volume before adding more, and mixing to combine.

While that goes, you’ll want to work on the second batch of veggies in a separate pan. I used just 2 cups of plain old frozen mixed vegetables. You can use the equivalent amount of zucchini, pumpkin, butternut squash, peas, string beans, whatever you like as long as you have a balance of green, orange, and white veggies.

The cauliflower and cabbage steam in the wok for about 20 minutes. They get all tender and sweet. I ended up needing a shocking amount of salt but feel free to start out small and gradually increase to taste. Top with fresh cilantro. Serve alongside rice or naan or stuff inside a pita for a delicious wrap!