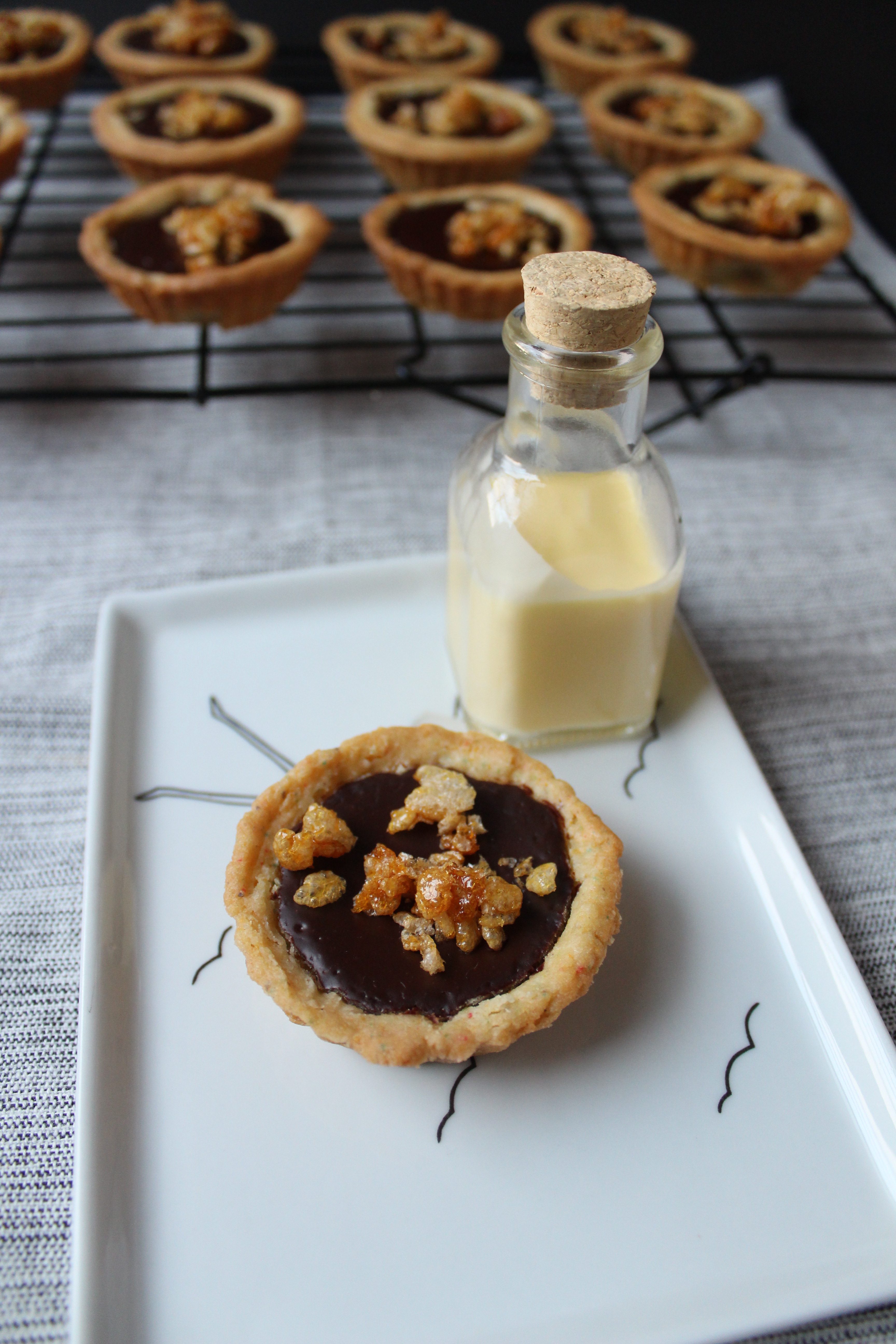 When my friend Jafreen and I entered a bake off during our undergrad years, we thought we had it in the bag. We were both good bakers, definitely spent more time in the kitchen than our peers, and would put together thoughtful, from scratch baked goods. Needless to say, we lost. Terribly. We were outbaked by Duncan Hines. I don’t remember who was on the judging panel, but this post is for you.

This past weekend we got to compete at the Islamic Center Professionals of NYU’s Bake Off. It was so fun. Secret ingredient was revealed 72 hours prior so research and experimenting time was limited. We were split into categories of cake, cookies, pies/tarts and puddings. My partner was the defending champ of the pudding category, with his cranberry creme brulee. This year we were in pies/tarts. So when they revealed the secret ingredient of breakfast cereal, my mind went into overdrive. If the secret ingredient were a single fruit, you’d have a lot less to work with. But there are dozens of cereals to choose from – all with different flavors and textures. 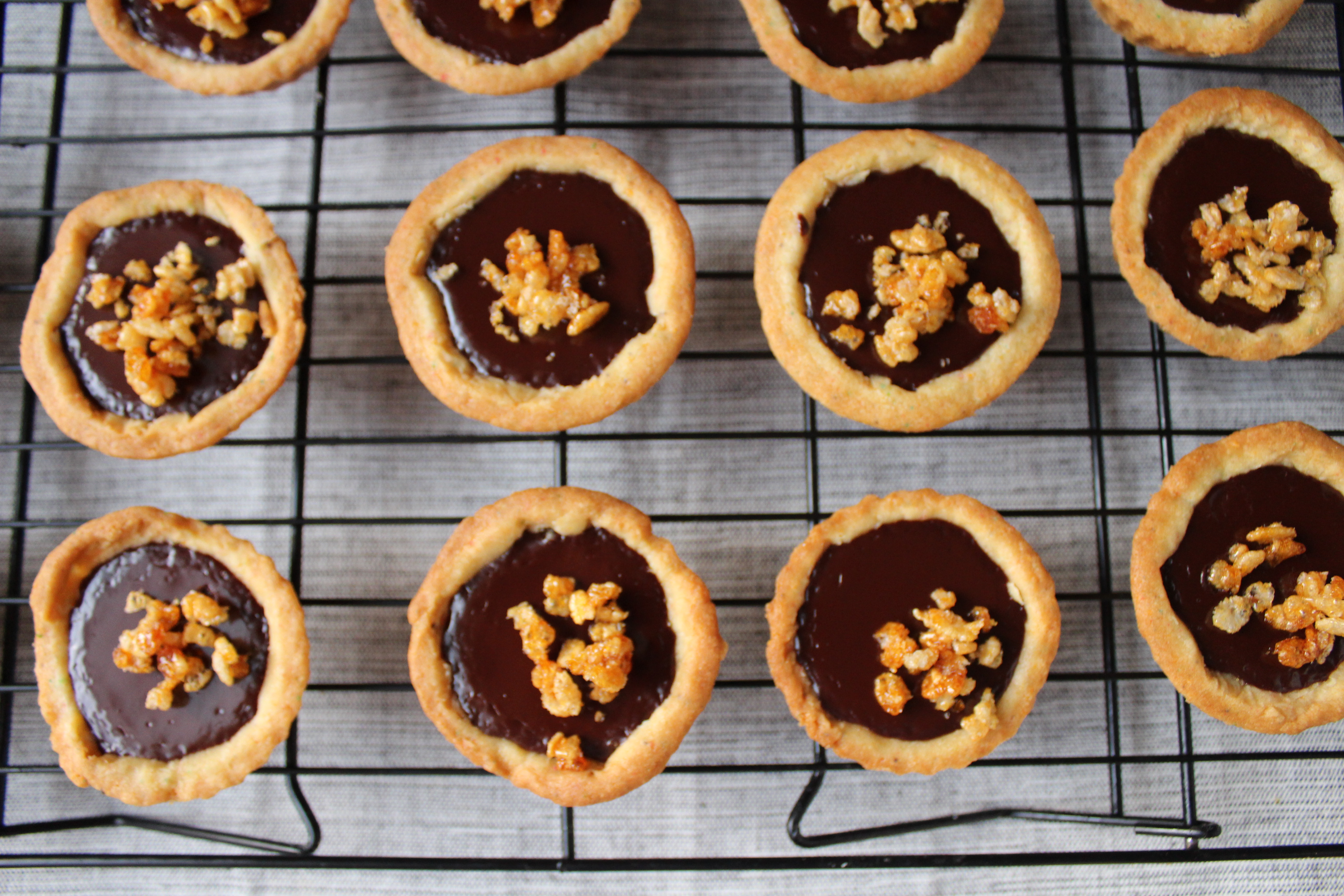 I knew I wanted it to be a tart rather than a pie – pies rely on the flaking crust to be considered a pie and are more often than not made with fruit. Tarts can have a little bit more flexibility – can be made with a shortbread crust, or cookie crust. Then in terms of fillings – should I do pastry cream and fruit? Chocolate and peanut butter? Should I incorporate the cereal in the crust? In the filling? On top? 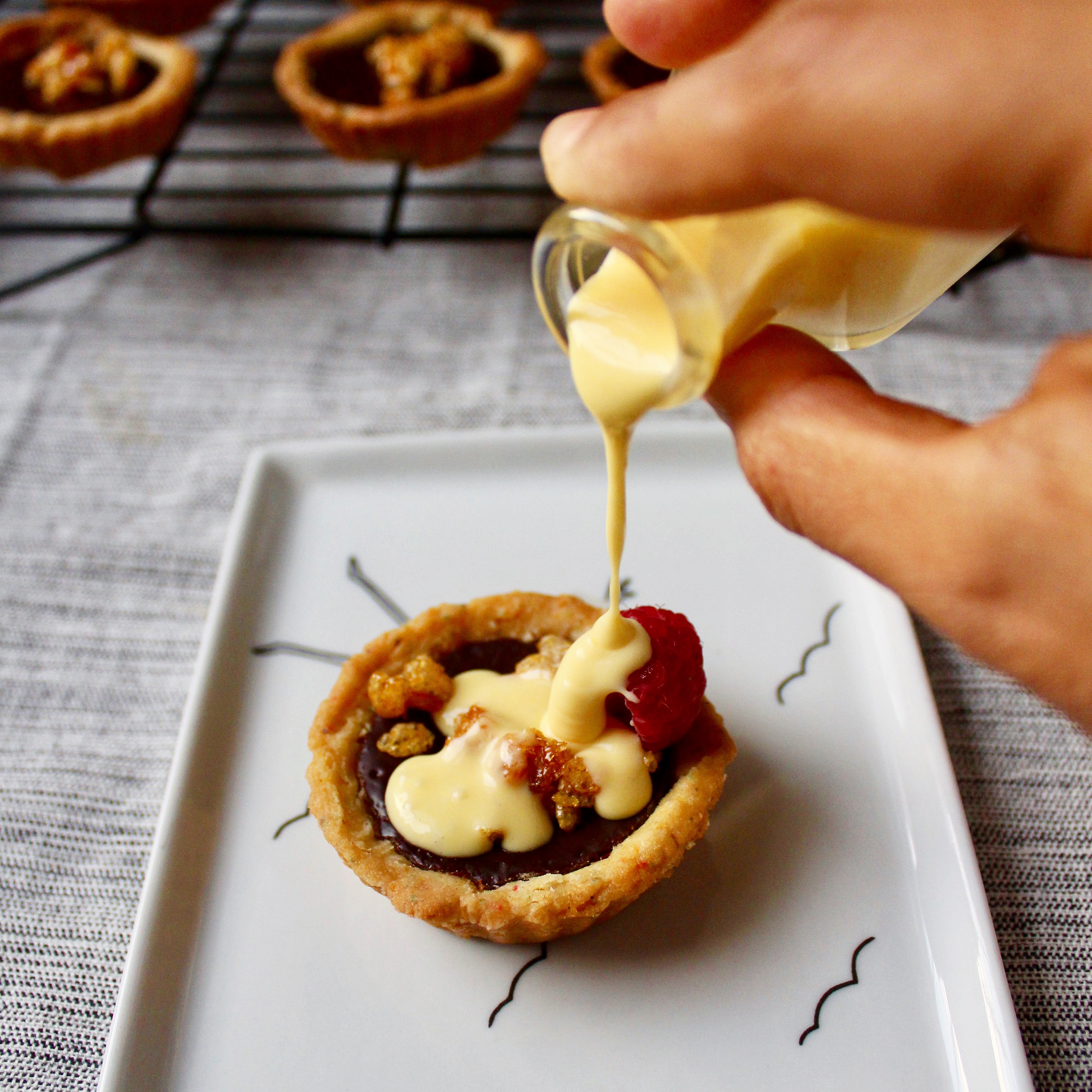 My partner pushed me to go the extra mile. After all, when it comes to bake offs, presentation can be just as important as taste. So we thought of recreating the cereal bowl plus milk pour over experience. What is a pourable topping in dessert? Creme anglaise. What goes well with creme anglaise? Chocolate, souffles and cooked fruit desserts. 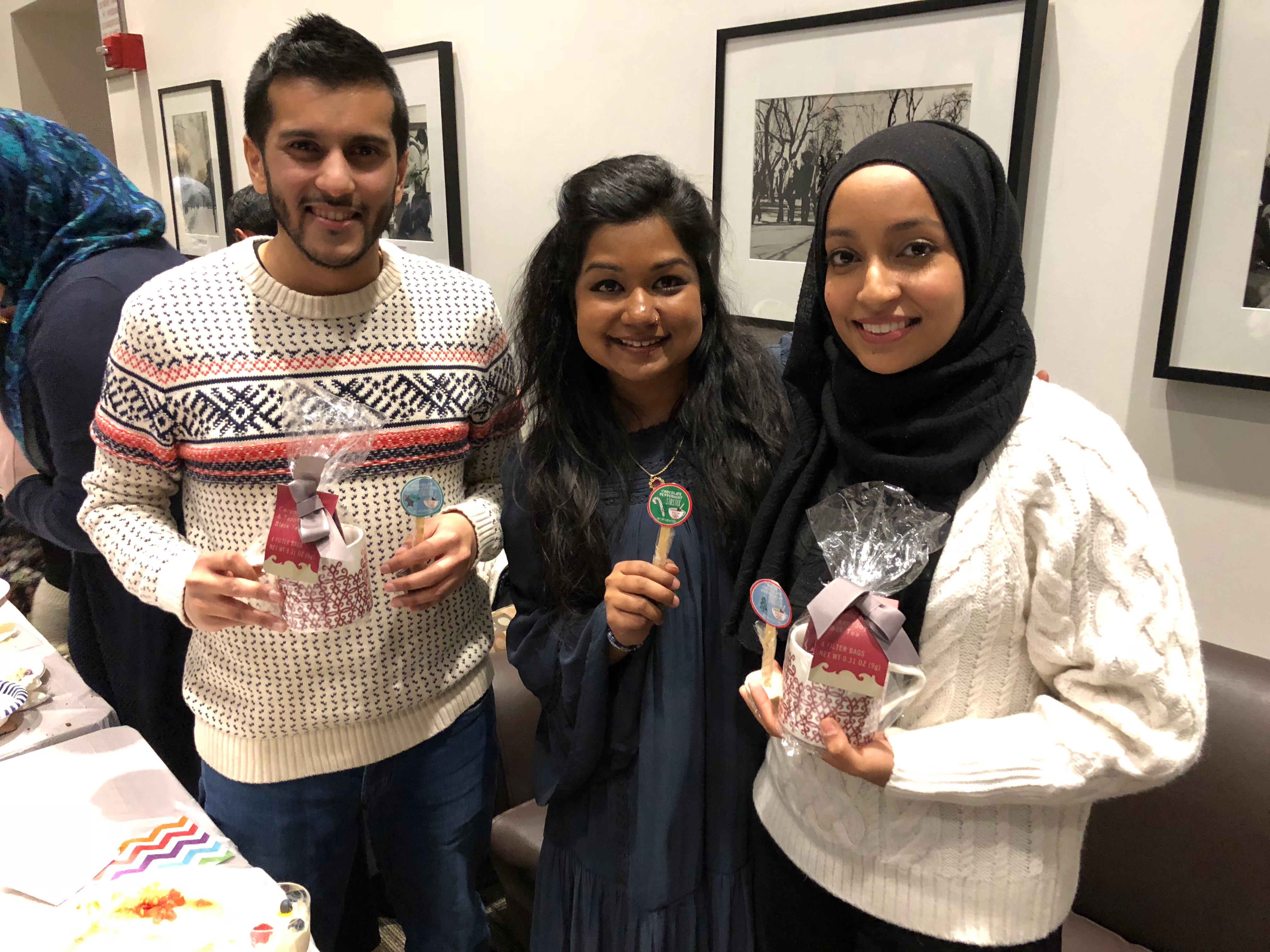 So the chocolate tart was born. Mini because we’d have to make portions for the audience to try (also they are more elegant). And pourable creme anglaise in mini bottles that I found in the wedding favors section of Michael’s. Cap’n crunch in the shell. Caramelized rice krispies on top so you have some crunch to balance the smooth chocolate filling. And garnished with a little berry. 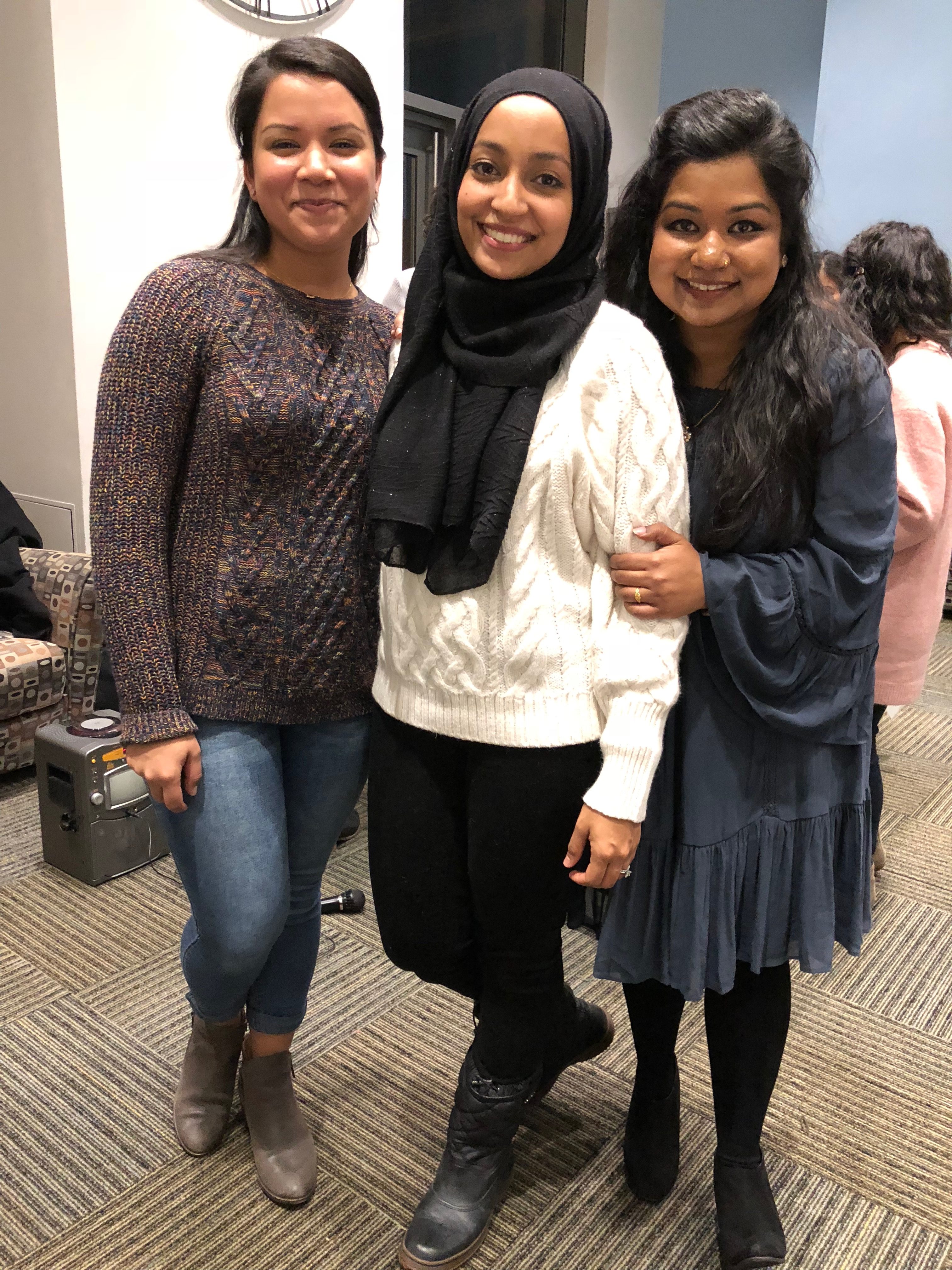 We were proud of our entry. And I was proud of my friends who entered, particularly because they were overcoming challenges of their own to be there. My old friend Jafreen, as well as my new friend, Moni of Moni’s Kitchen. 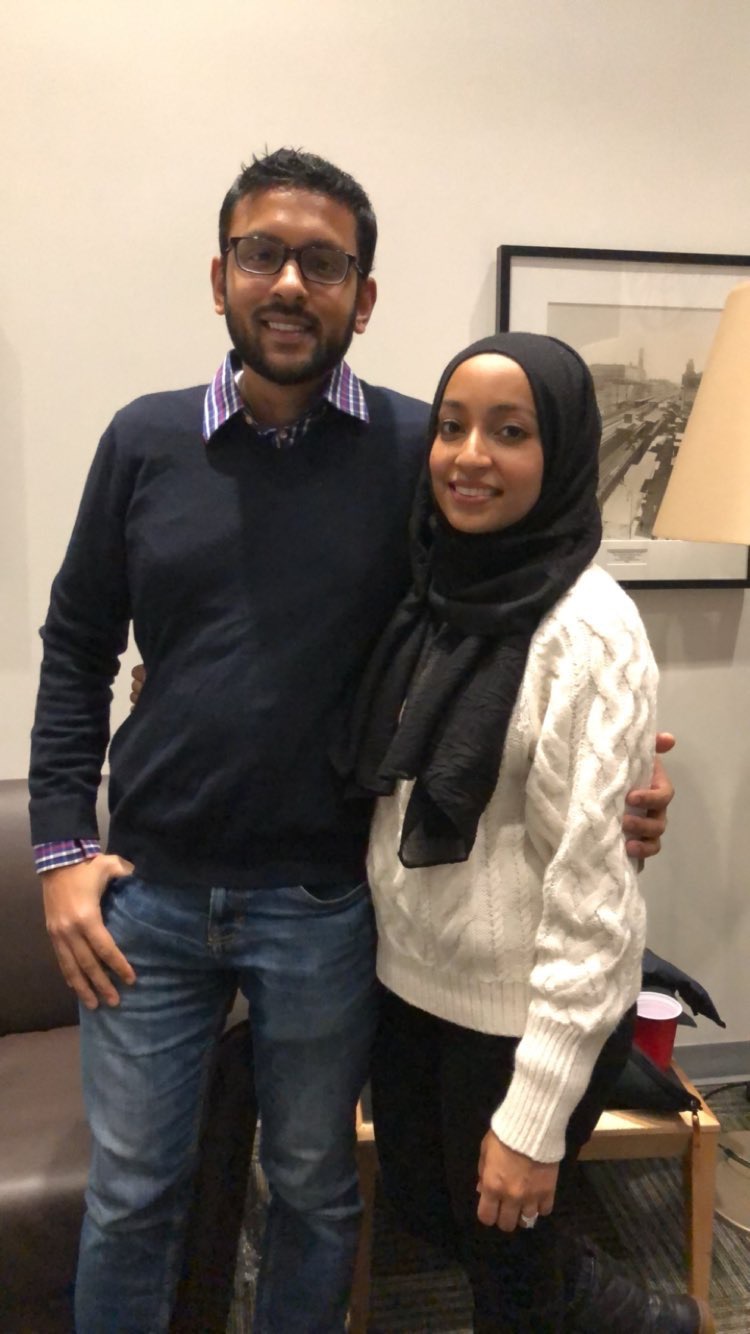 My husband was there for support. Isn’t he cute? OK you can stop looking now. 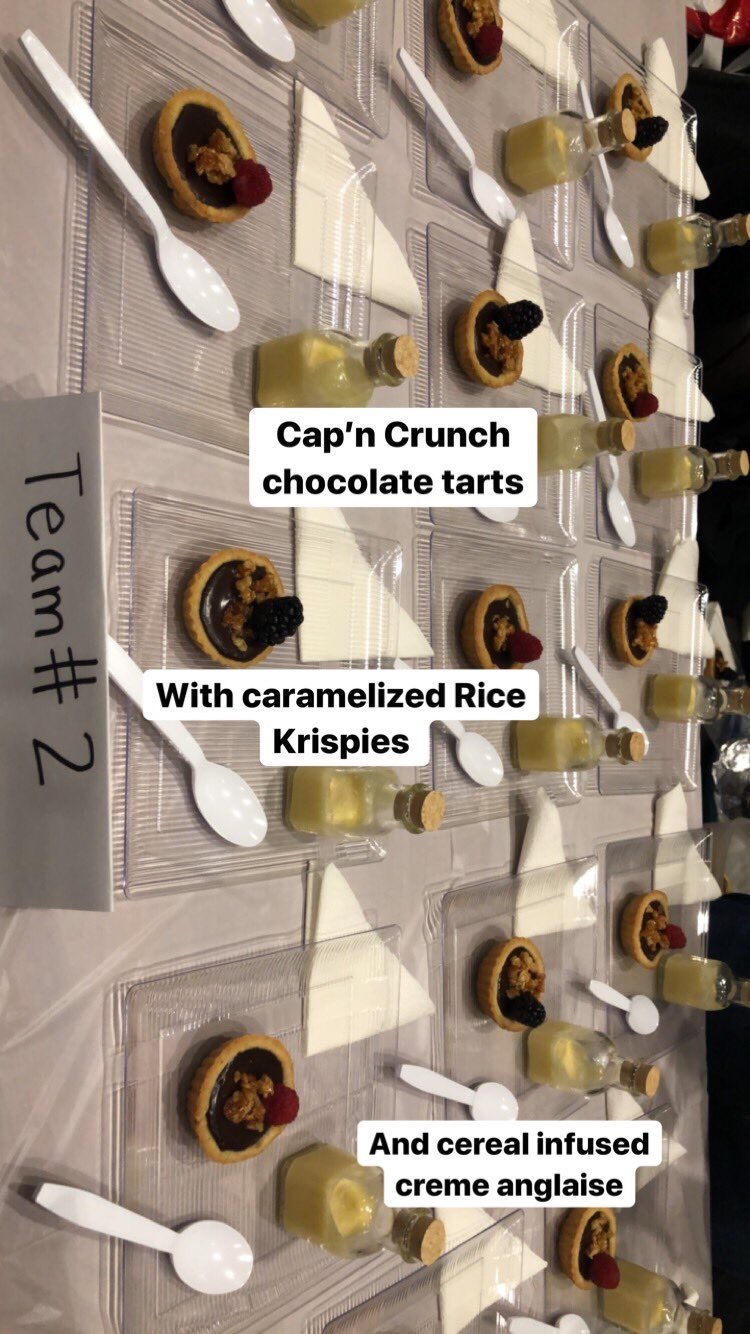 Ultimately, the judges deemed our tart the winning entry for our category, and the audience voted ours the best dessert of the night! Grand prize went to an amazing honey ricotta cheesecake with a Honey Bunches of Oats crust, homemade ricotta and divine salted caramel drizzle. Very well deserved! Can’t wait til next year!

Feel free to make this without the addition of Rice Krispies and Creme Anglaise. If you’d like to make a traditional tart without the cereal, simply swap out the Cap’n Crunch for the same amount of flour. And before anyone else tries to take this idea – Salted Caramel Rice Krispies Cereal. I’m calling it! You heard it here first!

For the tart shell (recipe adapted from Dorie Greenspan’s Around My French Table):

For the filling (recipe from Epicurious):

For the topping (recipe from Food52:

For the creme anglaise (recipe from Epicurious):

This is for my friend Aaisha of BakingPartTime. Last time she was over for a brunch party at our place, I made two pavlovas – one classic and one chocolate. I’ve posted the classic recipe before, but this time around I’m serving up the chocolate version.

By the way, can you tell we are crazy about pavlovas around here? If you haven’t had one – it’s high time to try. They hail from New Zealand, where my husband spent a good part of his teenage years. I love this man more than anything, but I love him a wee bit more for introducing me to this dessert. A welcome change of pace from cakes or cookies. Much easier to prepare than a pie. They are just the most perfect dessert to have in your arsenal. They are a winner presentation wise, as well. They just have the wow factor, but are deceptively easy to assemble, kind of like a trifle. You just whip up some egg whites with sugar. Bake it low and slow for 45 min to 1 hour. Once cooled, top with whipped cream and fruit (or chocolate).

The original recipe suggests topping it with strawberries and chocolate sauce. I didn’t have strawberries on hand, or the time to assemble the chocolate sauce, so I just have the bare bones version here. If you haven’t worked with whipped egg whites before, you needn’t worry. Just have patience. They take a while to whip up to the right consistency, unlike whipped cream (which I’ve turned into butter many times just by looking away for a minute).

If you’ve had plain meringues, then you might not think this dessert would amount to anything. Meringues have a tendency to be cloyingly sweet. But with the topping of just slightly sweetened cream, and the complexity of the chocolate (or in most cases a fruit topping), the combination of textures and flavors is just divine. The outside of the meringue is crisp. The inner part melts in  your mouth, kind of like a marshmallow. The cream eases the sweetness and ties all the flavors together.

The original recipe calls for superfine sugar – something I never have on hand – and for the chocolate in the meringue to be grated – something for which I have no patience. So, I swapped out superfine sugar for granulated sugar and was not in the least bit disappointed. I also finely chopped instead of grated the chocolate, which I think is for the best really. If you’re grating chocolate by hand, it’s going to melt all over your hands (which is probably not the worst problem to have).

Don’t worry about the crackly appearance. I’ve tried every trick in the book for keeping it from cracking and nothing’s worked. Take comfort in the fact that it gets smothered and mostly concealed by the toppings. Feel free to top it with chopped strawberries, raspberries or even blackberries.

Apologies for the month of silence from Kitchen3n. The dog ate my computer. More like the Apple store took my malfunctioning iMac for a week and couldn’t reproduce the problem we are CONSISTENTLY having at home. Does anyone else’s mac do this thing where it just randomly starts producing a lot of noise (like the fans are in hyperdrive) even though there are NO CPU intensive programs running? Then just goes berserk and shuts off? Any ideas would be much appreciated. I just barely got to edit these photos before the issue started up again and am finishing up this post from my laptop.

I realize there is pretty much no more room in the food blogosphere for another brownie recipe. I don’t care. I’m sharing my favorite. Also, because, everyone loves looking at pictures of chocolate desserts.

This is the classic Ghirardelli brownie recipe remixed to my liking. The original recipe (rightly so) had chocolate chips. NECESSARY in any brownie recipe. I added a teaspoon of instant coffee to the melted butter/chocolate mixture. A key ingredient in any luscious chocolate dessert. I also use bittersweet chocolate instead of semi-sweet, for a richer, less sweet brownie.

I baked these three different ways:

There is one more option: unlined baking dish for 25 minutes. I’ll save that for the next rainy day experiment. Serve these babies with a scoop of vanilla ice cream and live your life with no regrets.