It’s January and I know many of us are trying to find ways to eat healthy. I’ve had a little extra time on my hands so I’ve been coming up with different ways to eat healthy/less meat/fewer carbs. Not exactly low fat though. Kale caesar salad. Chana dal with veggies and coconut milk. Tomato soup. Today I whipped up this salmon and mixed vegetable sauté. Follow along for inspo on my Instagram! 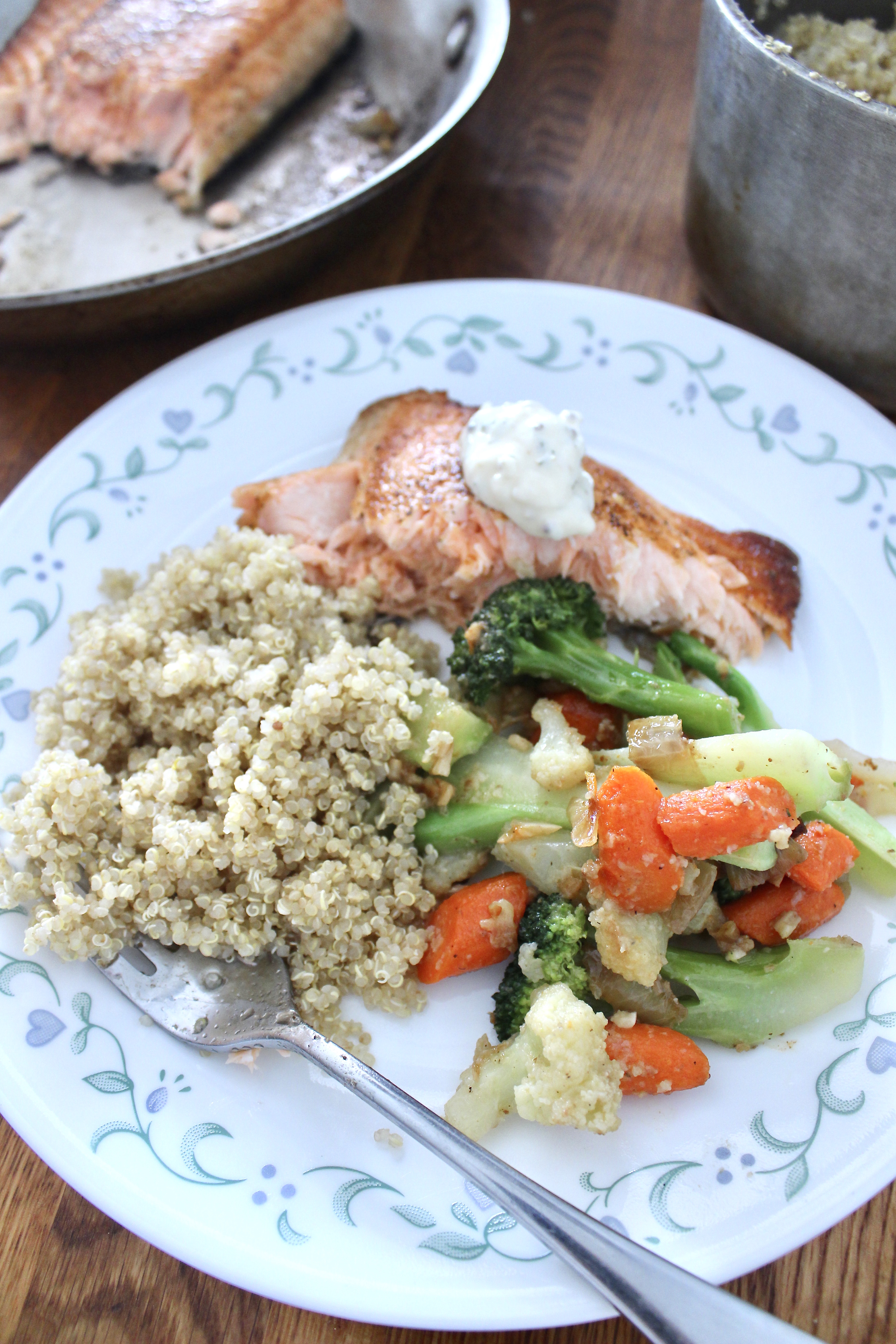 I’m calling this my #baesic salmon because even though it’s a basic way to cook it, it’s bae in my recipe book. I’ve tried cooking salmon just on the the stovetop, and it just burns on the outside before cooking through on the inside. If you lower the heat too much you don’t get the nice crust. This way, if you sear it on the stovetop, finish it off the oven, you get the best of both worlds. I wasn’t sure if it would be done actually, but when I dug into it, it was juuuuuuust slightly pink and rare in the middle. If you prefer it cooked well through, leave in for 2 more minutes. 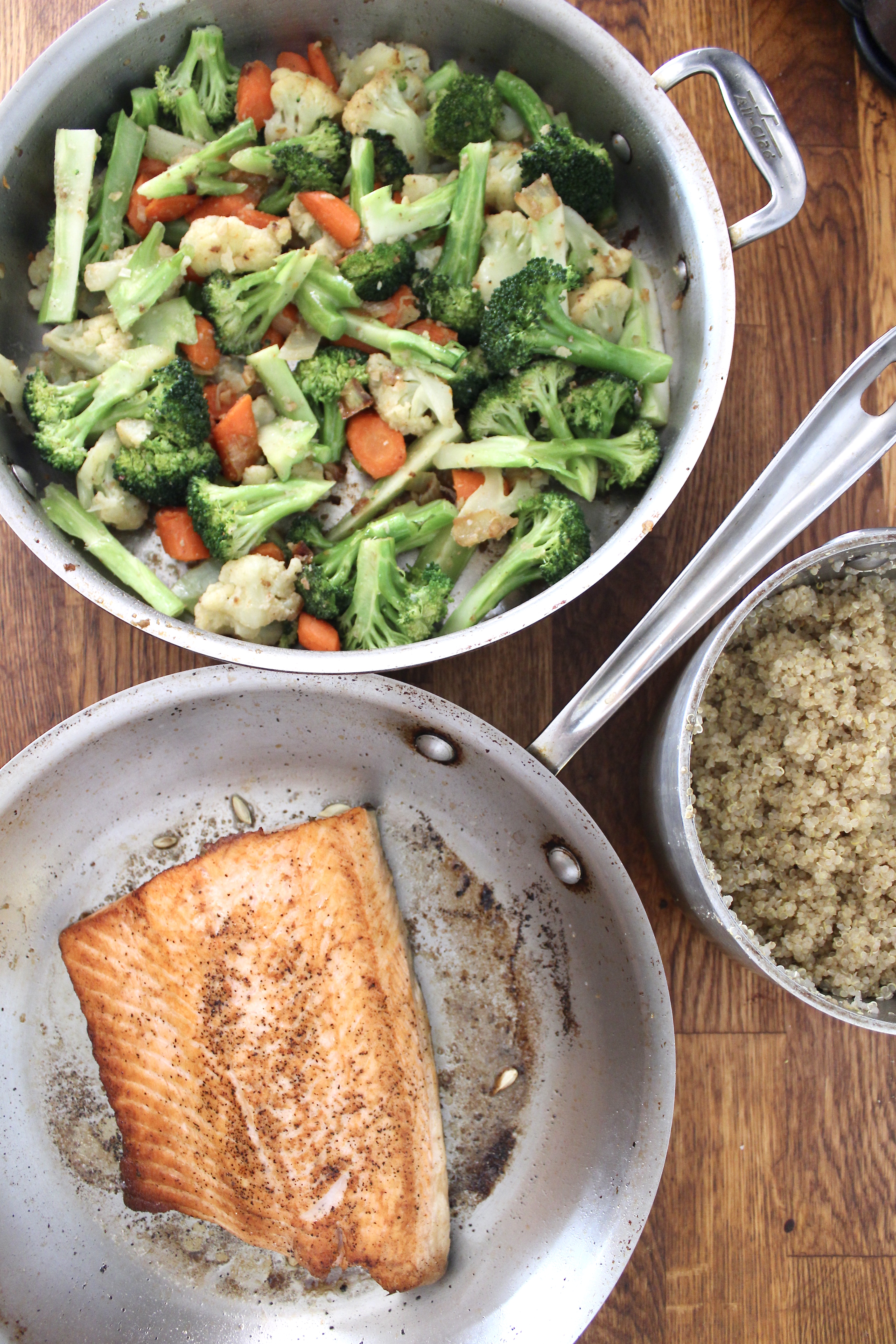 I know we all tryin’ to eat more nutritious food, less meat, fewer carbs. And I know salmon isn’t exactly the best option either. It’s overfished, not sustainable. But I for one need to change things up from beans, lentils and eggs. We still do chicken once a week or so. Red meat once a month maybe. Baby steps. 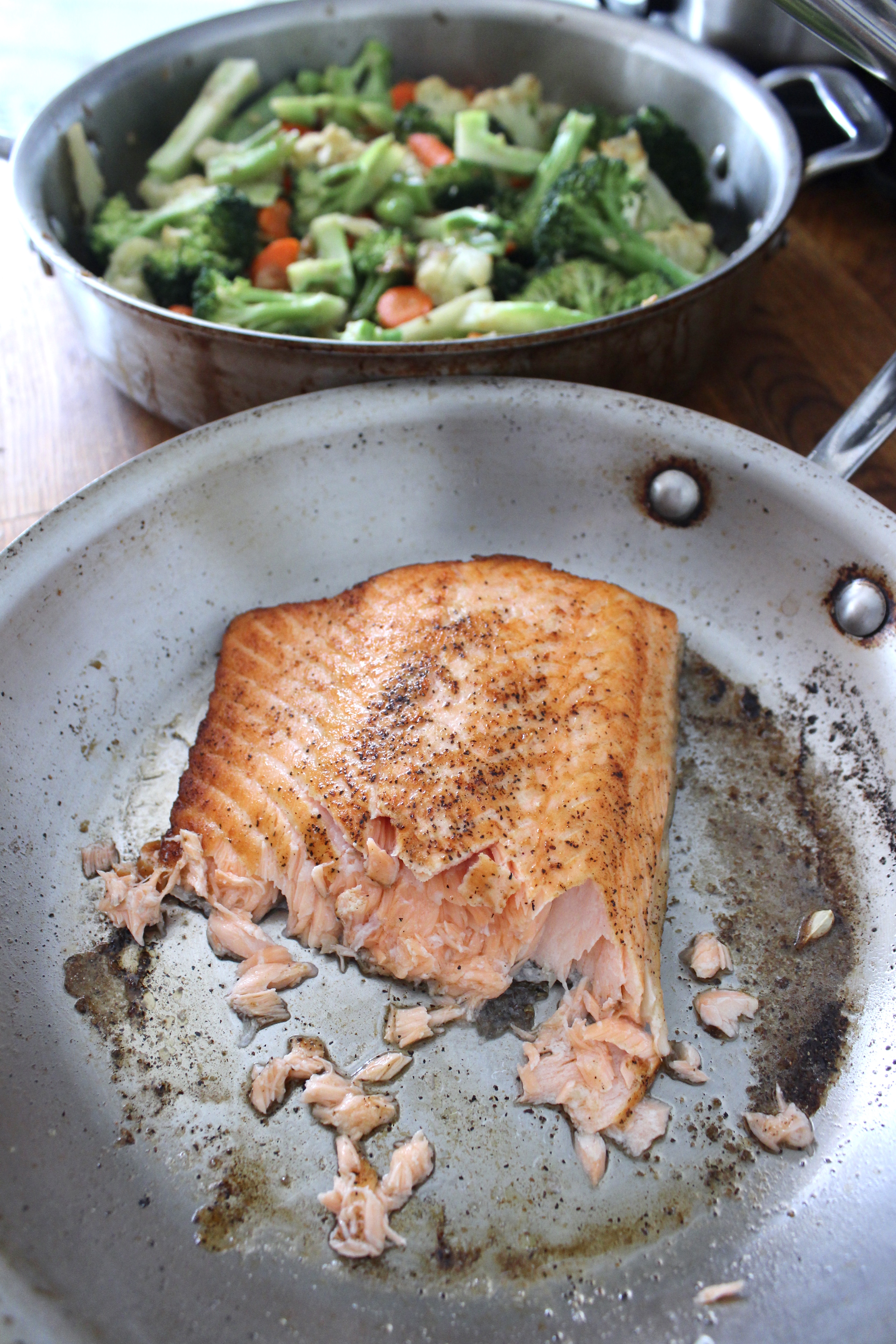 For the mixed vegetable sauté:

I was going to write about how comfort food for me is not cream laden, starch based dish. About how I would be disappointed during weekend lunches when my mom would bring out a pot of fish curry yet when I moved out to my dorm it was those memories that comforted me during cold, dark and lonely weekday nights. And one of the few things that connected me to my childhood as a married woman cooking for her own family.

But I realized I’ve written all of that before. And as touching as it is, I can’t dwell on it. Not with all that’s going on. I am sick of the vitriol being spewed from my screen. From fellow commuters. From people I’ve shared a hometown with for years. But I’m emboldened by the acts of good among all the recent backlash against my community. The little Texan boy that donated his savings to a mosque in his neighborhood that was vandalized. Brandon of HONY, who appeared on Fareed Zakaria, pleading the case of the Syrian refugees. Justin Trudeau and the choir that welcomed refugees with a rendition of Tala Al Badru Alayna – the song that the people of Medina sang to receive the Prophet Muhammad and his followers when they left Mecca due to persecution.

Scapegoating, racism, xenophobia – these are nothing new to mankind. But social media is. So I ask you, during these historic times, will we find ourselves as complacent as the citizens of the world during WWII? Will we let the negative news saturate our feeds? Or will we use the platforms we’ve been given to help our neighbors, speak the truth and contribute to the forces of good?

*Cook’s note: you can substitute about 2-2 1/2 pounds of bone-in, gutted and de-scaled fish that have been cut into thirds (e.g. porgy, whiting, buffalo). You can skip the shrimp in that case. We’re looking for flavor here (bones of the fish or tails of the shrimp).

**You ever notice that the French use Pernod (anise liqueur) to bouillabaisse (fish stew) and Italians add fennel to cioppino (fish stew). There’s just something about the combination of anise flavor with fish that just works!

***I know most recipes warn of overcooking shrimp but my personal taste is – I like it with a bit of a bite to it!