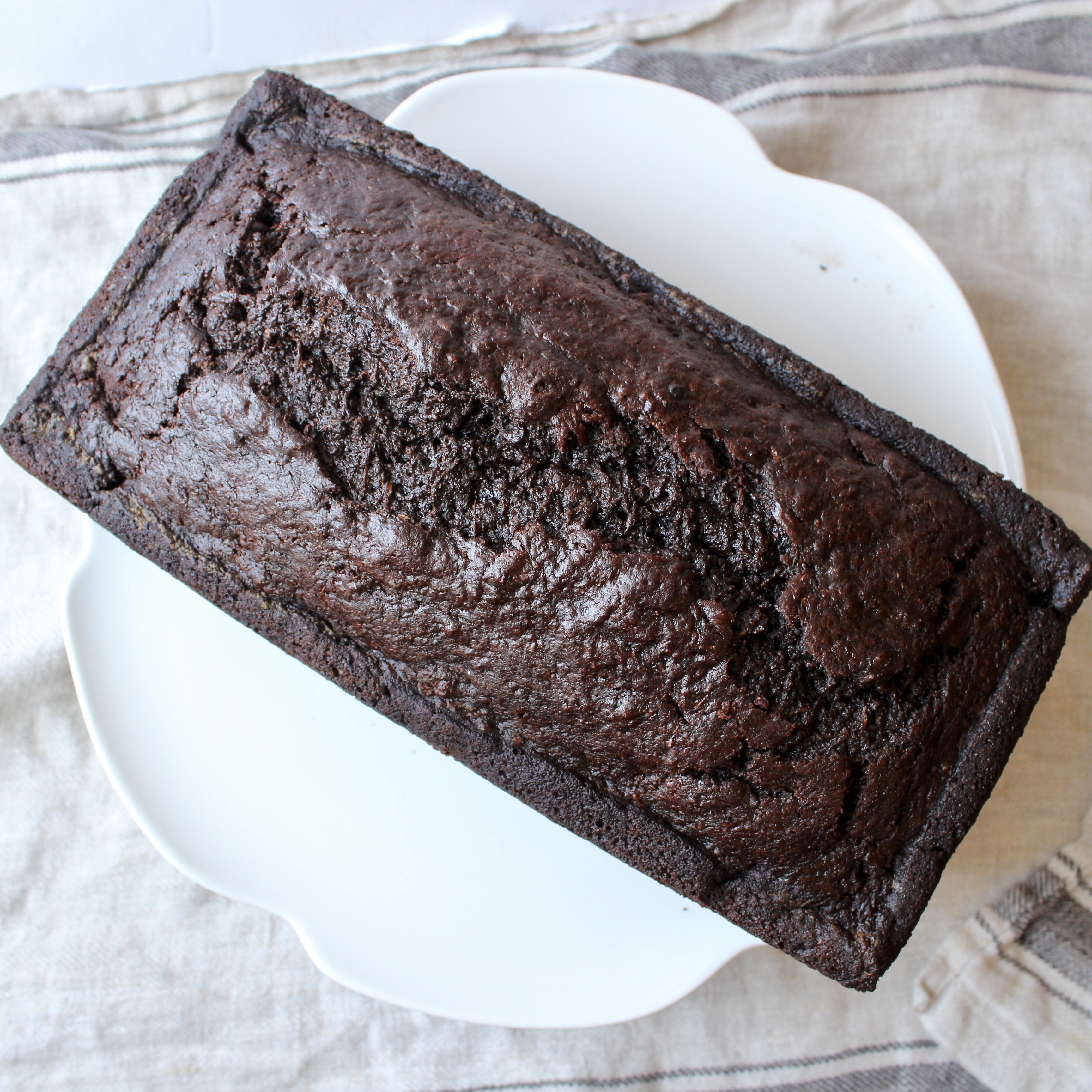 There is no rhyme or reason to this cake. It is neither healthy, nor a proper dessert. It is simply for chocolate lovers. It is a glorious use of a bland, high water content vegetable that lends it’s moisture to the crumb of this perfect snack cake. It’s blandness acts as a perfect palette for all the wonderful cocoa and brown sugar flavor to absorb. 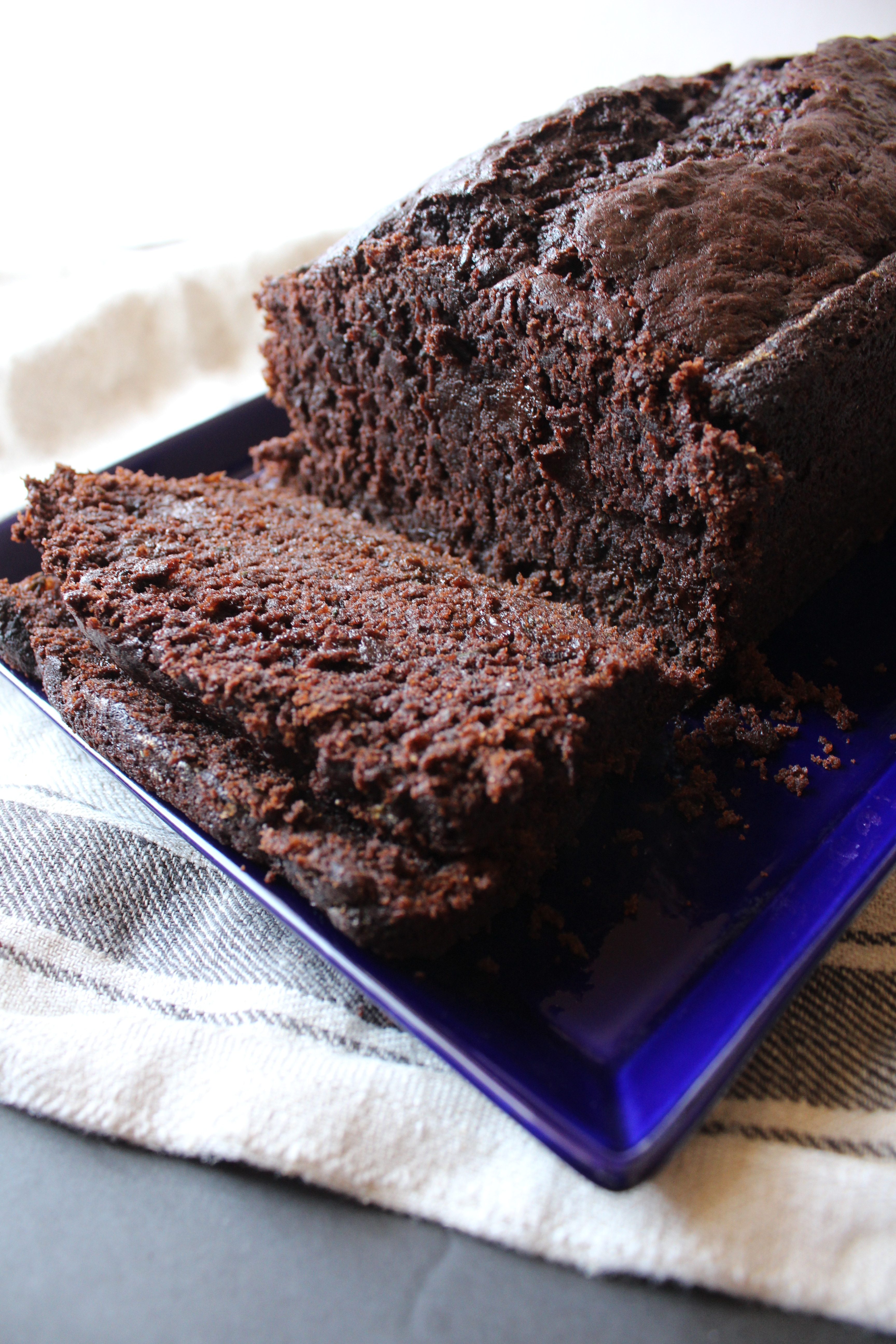 I’ve posted about chocolate zucchini cake before. This bread version is a bit heartier with whole wheat flour and almond flour – a little more substance to justify my classification of it as a snacking cake! I wasn’t happy with any of the recipes I found online for chocolate zucchini loaf, so I made my tweaks, including adding chocolate chips, and voila! Perfection.

*It won’t come out completely clean due to the moisture of this loaf. A few crumbs are ok. You just don’t want it to come out with wet batter.

I was incredulous the first time I heard the words “Zucchini Bread” at my adopted Jewish grandmother’s apartment some 15 years ago. Her name is Sophie and she was my mother’s confidant, advisor, protector and friend for many years. She taught her the value of saving. She raised two children during the Depression. She told my mother, every week she set aside $0.50. She grew such a small sum into stake in a multi-million dollar company and a condo in a luxury apartment building in downtown Manhattan.

So when she talked, we listened:

Right on all counts. Take it one step further with chocolate zucchini cake. I was skeptical when a mom brought zucchini brownies to a play date. But it had such deep chocolate flavor! And it was moist! And magical! I realize that zucchini’s blandness kind of works in its favor in baked goods. Between that and the water content, it’s the perfect vessel for delivering a rich, moist, chocolate crumb. I was nervous as I folded the 3 cups into the batter, that those eating the cake would see slivers of green running throughout, but it melted right into the cake. And with that much veg content, you don’t feel like the world’s worst parent when your kid (and husband) reaches for it throughout the day.

*Dutch process cocoa, though harder to find, is essential for that deep chocolate flavor. When you use a quality cocoa powder, it makes all the difference between a standard chocolate cake and a gourmet one. Can be purchased online.

Is your fridge forever cluttered? If so,  you can empathize when I say I made this cake for the sole purpose of clearing out a container of yogurt. I’ve been using yogurt quite a bit in lieu of buttermilk for our morning pancakes. Just sub it in your favorite buttermilk pancake recipe, thin it out with some water or milk, and it is just as good!

Inaya is my go to person for sifting dry ingredients together. She can almost mix wet batter, but needs a little help reining in her stirring excitement. Kudos to her since I am not easy to work with in the kitchen. Any one of my friends who have attempted to cook or bake with me only to run out screaming and flailing their arms can attest to that.

Sorry for the sofa/printer pictured here. It’s hard to find good lighting in my apartment and it just so happens that smack in the middle of the living room is the best place.

There’s no butter in this cake. And I can’t say that I don’t miss it. I do. Sincerely. But, luckily, I am taking this over to my in-laws tomorrow, where there is a sort of hex on butter (I know, I know how could we be so different, might as well be from another planet). But there is no denying that some of the best cakes are made with vegetable oil. Namely because veg oil is a liquid at room temperature, so cakes made with it tend to be more moist. Take Beatty’s Chocolate Cake from example. And make no mistake – this is yet another Ina recipe, adapted a bit, which she adapted a bit from Dorie Greenspan.

This cake gets a few hits of lemon flavor. First, the lemon zest infuses the batter. Second, it gets drenched in a lemon/sugar syrup while still warm. Third, it gets a pretty little glaze from a powdered sugar/lemon juice concoction.

I used large eggs instead of the extra large eggs she usually calls for. Didn’t miss a thing. I might try a mixture of baking powder/baking soda next time though, just to see how it affects the rise. Also, I omitted the vanilla extract, which I sincerely regret.

I also used 1/3 cup powdered sugar for the icing rather than a full cup (we’re watching our waist lines around here LOL).

So, if you know of any butter haters, this is the cake to make for them.