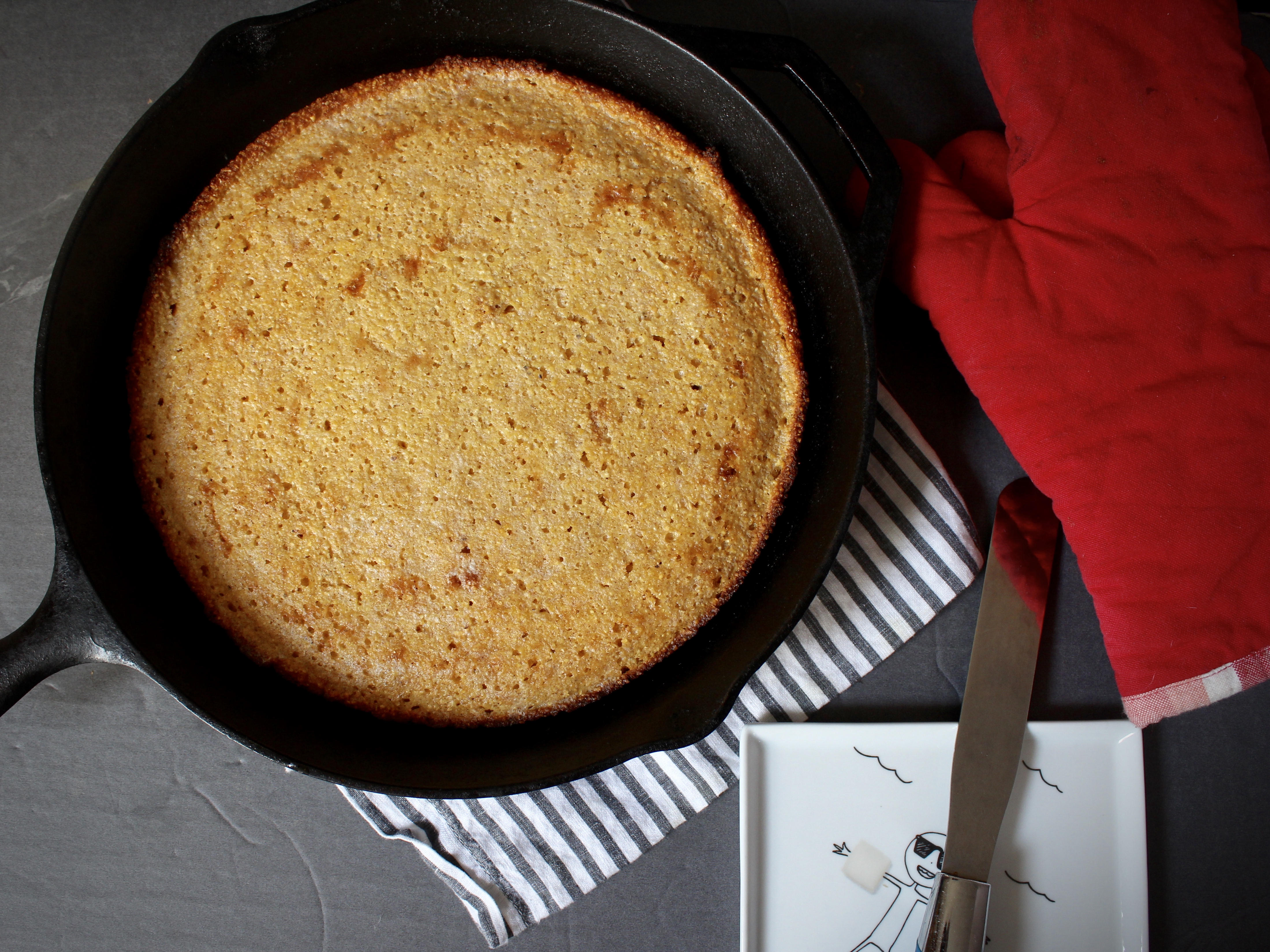 The first time my husband had brussel sprouts, he boiled them, and ate them without any seasoning. This demonstrates the extent of his culinary abilities.

Since then, he’s swore he would never eat them.

Except one Thanksgiving when I roasted them til they were crisp outside, tender inside, and had a salty bite. That year, the brussel sprouts were cleaned up!! There wasn’t a single one left. As with most foods, proper preparation is key. Add some pomegranate arils and reduced pomegranate juice to the mix, and you get a perfect balance of salty/acidic/crispy/creamy.

I love the NY Times recipe, except I found cooking them at such a high temperature burned my tiny brussel sprouts! It may be because I roasted them on a rack placed on the lower third of the oven (I find that level works best for my cakes). I suggest cooking them at 375 degrees, then checking them at 30 minutes. If they look like they could use a bit more char, leave them in for 5 min longer. 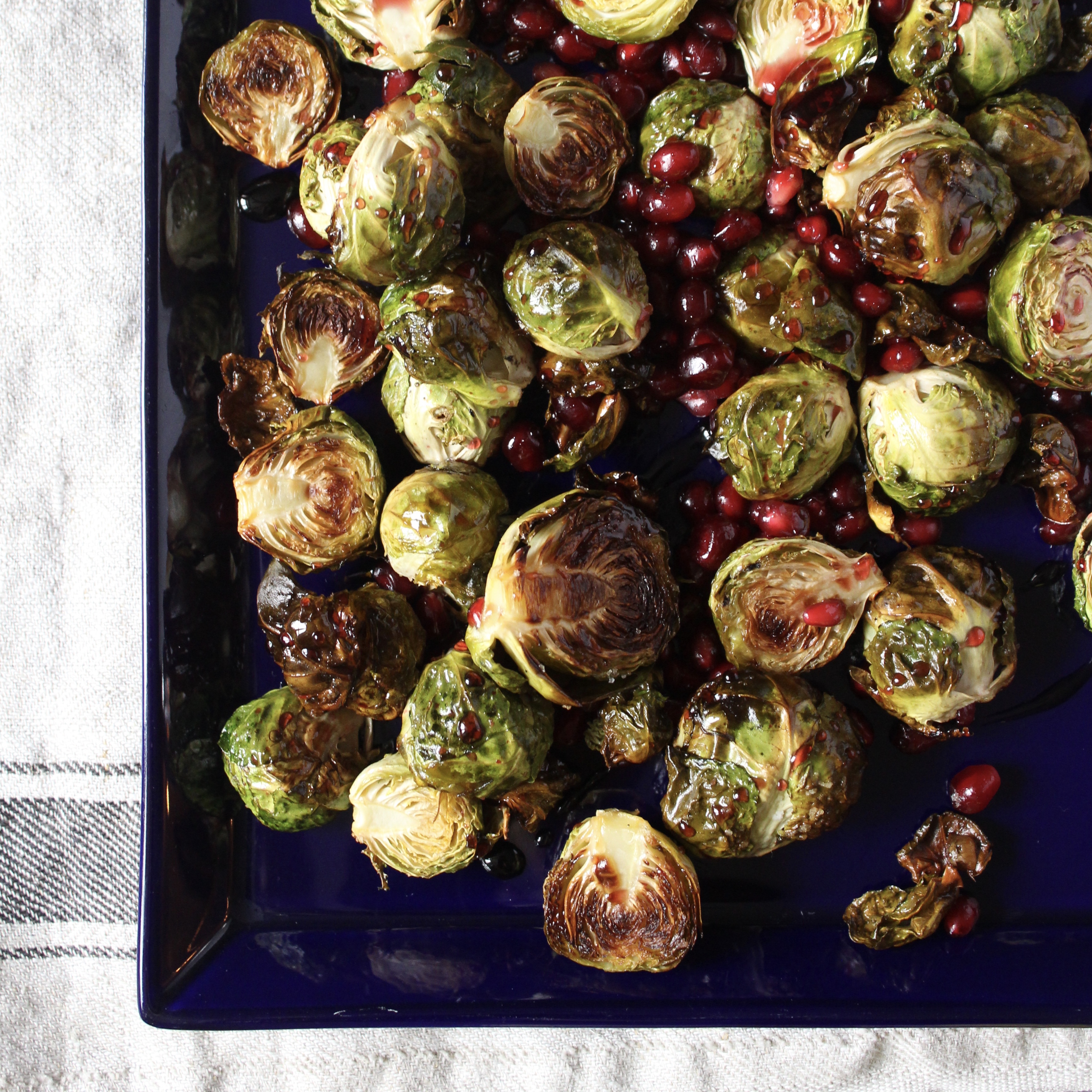 These taste best when they have a salty bite, but if you’re watching sodium levels, start at 1/2 teaspoon salt and increase to taste.

1. Preheat oven to 375 degrees F. Wash and dry brussel sprouts well. With a small paring knife, trim off the bottom of each brussel sprout and slice them in half. Arrange them all on a large sheet pan lined with parchment paper and dress with the salt and oil. Mix to combine and spread out on sheet so they don’t steam, rather roast in the dry heat of the oven. Bake for 30-35 minutes.
2. In a small to medium sauce pan combined pomegranate juice with sugar. Bring to a boil over medium heat and turn the heat down to low. Simmer for about 25 minutes or until you have 1/4 cup of liquid left. Keep an eye as it might burn in the last few minutes.
3. Transfer roasted brussel sprouts to serving tray and add the pomegranate arils and drizzle some of the pomegranate reduction over the top. Taste for seasoning and adjust as necessary.

I have an exciting announcement to make! No, I’m not expecting baby number 3 as my mother would so desperately hope for. I am partnering with awesome, organic, halal and quality meat provider Honest Chops! Gone are the days when us strictly zabihah halal eating folks were limited to the options available at our local butchers (God bless them, but good luck if you’re looking for a steak or any other sizable cut of meat). With Honest Chops, not only can you get a great selection of cuts, but you can rest assured the animals are local, were raised humanely without steroids or antibiotics, and are zabihah halal. Some, including the lamb and beef, are even grass fed! YUM! For the next few weeks I’ll be posting a new recipe each week highlighting some of the great cuts of meat they have to offer. I love you guys. I love them. I hope you guys love them as much as I do!

For my first post, I’m offering a turkey alternative for your Thanksgiving spread. I promise, non-turkey poultry is not sacrilege. Plenty of people (ahem, husband) aren’t fond of turkey. Some people do cornish hens, maybe even a large roasted fish (Everybody Loves Raymond, anyone?).  A roast chicken is perfect for a more intimate gathering. The way I do it here, in a cast iron skillet, is wonderfully homey, rustic and easy! No need to get down the giant roasting pan (or purchase one just for this once a year dinner). You just need to ensure your skillet is well seasoned (read: greased). If you don’t have a cast iron skillet, any heavy, large, oven proof pan or casserole will do the trick.

I used an herbed butter to flavor the bird and the surrounding potatoes. It’s got some of the traditional fall flavorings: sage, thyme, orange and lemon zest. But don’t be alarmed by the amount of seasoning – it’s enough for the bird, potatoes, and probably one more roast chicken. You could substitute other root vegetables in lieu or in addition to the potatoes – you just want to ensure it’s cut big enough to withstand the long cooking time. This was a pretty small bird, weighing in at 2.5 lbs. It only took 1 hour at 450 degrees F for the internal temperature at the thigh to reach 165 degrees F. I believe it’s an additional 15 minutes per pound – but your best bet is either a meat thermometer or slicing into the thigh to see if the juices that run are bloody or clear.

Just in case you needed a visual for where to place the meat thermometer.

Now there are all these different techniques for ensuring juicy breast meat. Flipping the bird (not that kind!) halfway through the cooking process. Spatchcocking. Dorie Greenspan suggests Joel Rubechon’s technique of cooking the bird on its side, flipping to the other side, then after it’s done, turning it upside down and doing a rain dance (for moisture, of course). Ok, I made up the dance part just to show what lengths some will go to. The fact of the matter is – white meat is white meat. It’s inherently more fibrous than dark meat. But with a bird this size, I doubt you will run into issues with it drying out. I say this after roasting this in one position for the whole time, without any basting. Though, I will say, with the herbed butter spread between the skin and the meat, that ensures a sort of self-basting.

If you don’t have sage, I’d imagine rosemary would work well. Or even tarragon. Something earthy! The last thing you need is some kitchen twine to tie the chicken’s limbs to the body (you don’t want the limbs flapping about, otherwise they’d overcook). With that said – happy eating and start to a holiday season!

As a final note – don’t toss those pan drippings! We’re not gravy crazy around here so I made a quick pasta and peas dish. Simply toss the carcass and remove the vegetables from the pan. Warm it over medium high heat. Add half a pound a cup of frozen peas. Cook for 2-3 minutes. Add cooked long pasta (half a pound of spaghetti or fettucine). Cook until warmed through. Add a sprinkling of grated parmesan.