Not food related but since my days since November 2016 have been split between baking, family and activism, I thought I’d share some of my experiences from the campaign that has rocked America the past week. 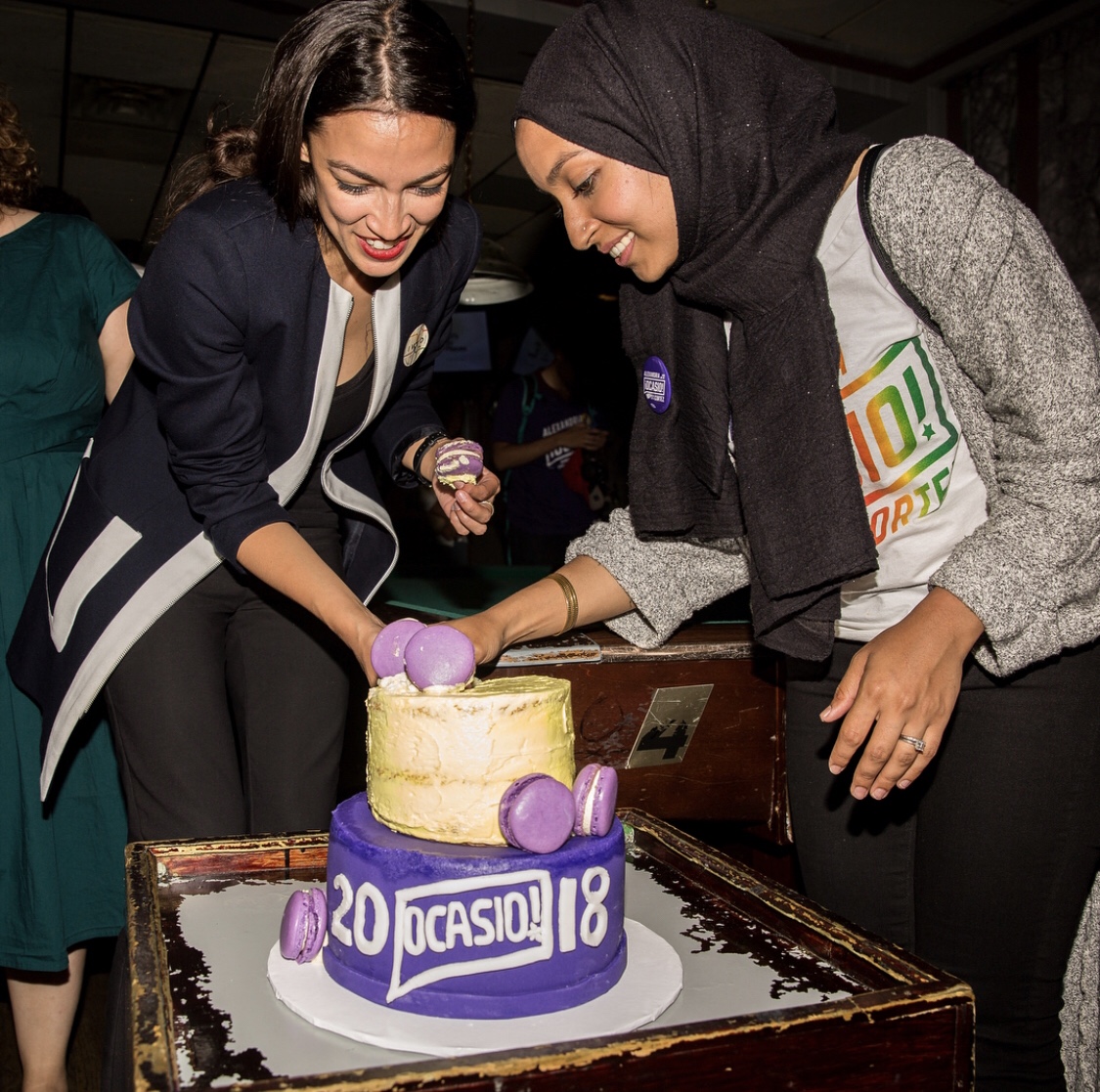 Wouldn’t be a celebration without cake! Photo source: Getty Images

I first met Alexandria Ocasio-Cortez at a Queens Stands Up Rally circa June 2017, organized by my friend and local activist Ethan Felder. I was struck by her patience – she waited in the sweltering heat, in heels and a black dress, while 2 hours of speeches went by, then went up to the podium, and made her case for the need for new leadership, new policies, and a new path forward for our country. She delivered her message powerfully. At a time when Democratic leadership’s message was “We’re working on the message”, she offered bold, progressive policies – medicare for all, criminal justice reform, and a green energy based economy. 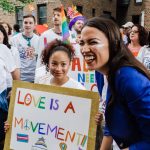 At a community pride parade with Alexandria’s niece 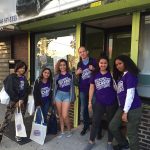 Our diverse group of canvassers 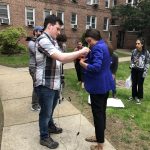 During a volunteer led video shoot for Bengali outreach 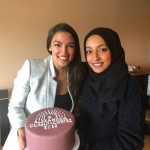 At that fateful house party. Wouldn’t have been complete without cake! 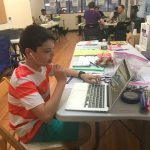 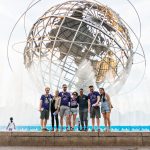 How I got involved

Fast forward eight months, and we re-engage at a house party in Forest Hills, again, organized by Ethan. I invite a few activists I know. Alexandria makes her pitch and call to action: we need help getting on the ballot. We need signatures, and we need all of you to help make that happen.

Soon after I e-mail her volunteer organizer, Bilal Tahir, letting him know I grew up in her district and I have a strong network there of relatives and friends that I could work to help get her on the ballot. His response came a few days later in the form of an email addressed to me and a few other folks: “Congratulations! You are your neighborhoods’ respective field captains!” …at this point, I had never signed a petition signature, had no idea about the petitioning process, never knocked on a door, etc. So I hopped on a call with Vigie, Alexandria’s campaign manager, and got some basic training: do’s and don’ts of petitioning (e.g. no offering of cookies in exchange for a petition signature). I looked at my calendar and set up a few events, about 3 per week (usually Fri/Sat/Sun) during the afternoons or evenings, over the course of 5 weeks. Little did I know that as captain, I needed to be at every single event, coordinating volunteers, being there from start to finish to train them, hand out materials, then collect and ensure all guidelines were met. We waded through snow, dealt with many belligerent voters, but we also had a lot of good conversations: conversations with voters who had disengaged from the process, from folks who supported progressive bold legislation but didn’t know how to plug in, and from people who felt disillusioned by the process and wanted someone who was more in tune with working class struggles.

We learned the strategic areas for signature collection: the post office on 37th avenue when commuters are heading home but not super rushed, the green market where many progressive minded folks are eager to see change. We also learned which spots were not so strategic – right by a subway station (the overhead 7 train is loud!), the main strip of 74th street (too many shoppers from outside the district), diversity plaza (ain’t no one stopping there to talk to you).

Needless to say, we collected enough signatures to get on the ballot. Over 5,000 when the requisite was 1,250. The biggest surprise though – we weren’t challenged. We were sure, that like almost challenger before us to go up against the machine, our petitions would be legally challenged and we wouldn’t get on the ballot, despite the pains we took to ensure all those submitted met the almost impossible guidelines (no abbreviations, need to initial by any mistakes, if just one signature is not a registered in-district Democrat the whole petition is tossed, etc.). 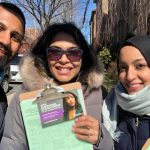 We canvassed during some cold days! 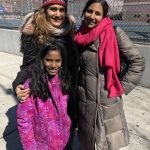 Getting our kids involved! 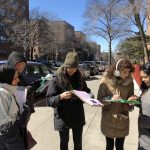 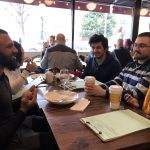 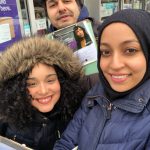 With MVPs Bilal and Karen 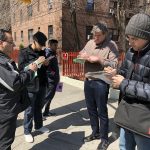 Soon after the euphoria of getting on the ballot died down, we had a field organizing meeting at my parents’ home in Jackson Heights. It was then that I got to meet some of the campaign staff:

One person I haven’t mentioned is Saikat Chakrabarty. Till this day we haven’t exactly been introduced, but he’s the executive director of Justice Democrats and played a huge role in the campaign’s success. More on the role of JD forthcoming…

I learned what a turf was (a teeny tiny subsection of the district defined by the “election district/assembly district), how to use van to “cut turf” or pull up the list of Democratic voters per area that we could target for each canvassing event leading canvassing events in Jackson Heights, East Elmhurst and Corona. This time, instead of asking folks to sign our petitions, we were informing them of the upcoming election (oddly on June 26, separate from all the other primaries) and about our campaign – why we as volunteers were out in the 90 degree heat schlepping clipboards, palm cards and posters. Why we we felt it was time to get money out of politics, to support a candidate that refused corporate PAC money so she could legislate on behalf of her constituents, not on behalf of special interests. In an area experiencing skyrocketing costs of living, it was critical that we made the connection between the incumbent’s reliance on luxury real estate developers’ money and the free reign they have on the overdevelopment of the district. 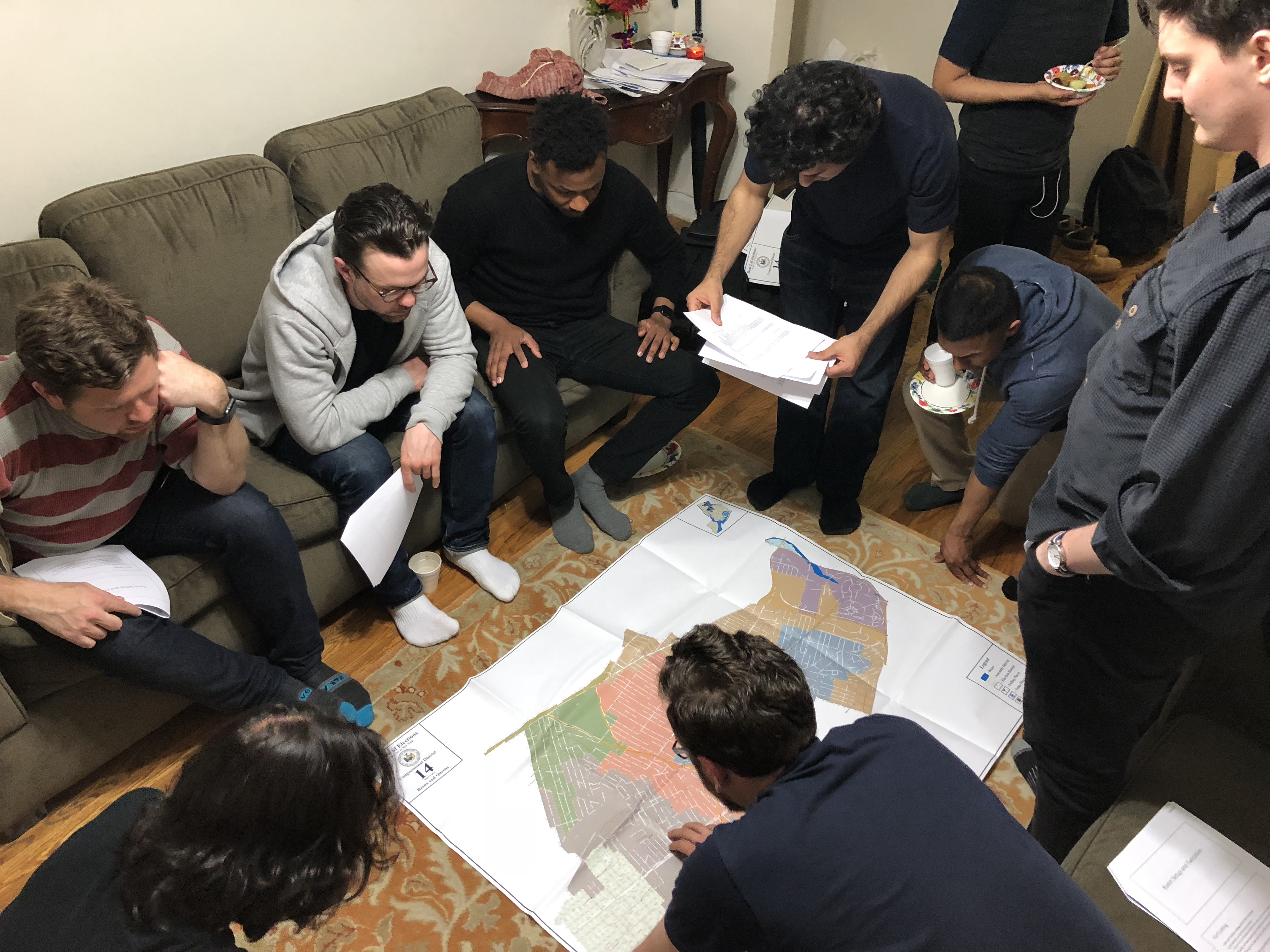 Define a win number (how many voters you need to win) and get your team to pounce, making every effort to hit your targets every day (we actually did not hit our targets, but won anyway). We didn’t have resources to poll constituents, so all we had were our recorded number of Ocasio supporters. I don’t know the final numbers – I guess I should find out! 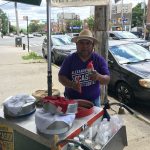 A friend of the campaign 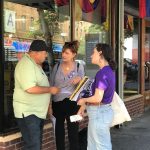 We had some help from Susan 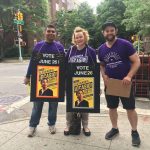 Our JH rockstar Matt with volunteers 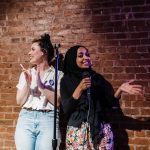 Simone and I during a comedy benefit for the campaign. Photo by Corey Torpie Photography 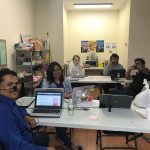 We had call time every evening from 5-9PM 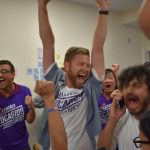 Jake and Bilal pictured here soon after the election was called.

Our team’s energy and enthusiasm was a stark contrast to our paid counterparts. Some of the canvassers from the incumbent’s team would hit up my mom and her neighbors and the messaging usually went: “Vote for Crowley, he stands up to Trump” or “He’s always stood up for immigrants”. Which are good things, but they don’t give voters something to look forward to, something to strive for. One of the biggest impetuses for this campaign was the failure of the Democratic party leadership – losing 1,000 seats across the country, losing the presidency, and many state legislatures. More of the same Milquetoast toast messaging felt like signing up for another term of a Trump presidency.

Can you blame them for how stale their ideas have become? Some of our elected officials have been in office for 20, 30 or more years. How many people stay at the same job in corporate America for that long? If you’re not moving, you’re not growing. Some are even too old to understand the technology sector, the threats that automation poses to American workers, the potential of Facebook to inflict further harm on our rights to privacy, the talent/tools available to push progress in the public sector. It’s time we elect not just one progressive millennial, but a whole caucus of them.

You know the saying, strike while the iron is hot? Well, the timing could not have been better for this campaign. We had the advantage of: 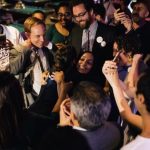 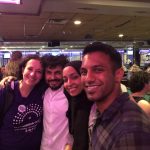 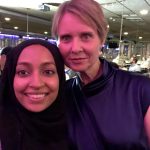 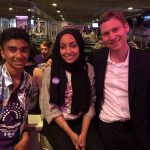 With our youngest canvasser, Anil, and Ethan

As the polls closed on election night, Alexandria reflected on the successes we had already achieved: expanding the definition of an off-year primary voter, educating and training hundred of volunteers in electoral campaigning, and starting a movement calling for the abolishment of ICE. At about 9:13PM I checked Politico – it placed her in the lead with 13% of precincts reporting. The whole car ride to the election night venue, Daniel continuously checked his phone. The numbers were looking better and better. Then, as I was looking for a parking spot, I got a text from the other camp, “Congratulations”.

I have to conclude with this: yes, everything fell into place in terms of timing, messaging, the talent of the team, but one thing that set this campaign apart from every other primary challenger on the ballot was Alexandria Ocasio-Cortez. In terms of candidates, she is one in a million. As articulate as she is relatable. As intelligent as she is grounded in her advocacy. As charismatic as she is fierce. I can’t tell you how many people said “She’s talented! She’s not going to win, but she’s got a bright future ahead of her.” This campaign was as wildly successful as it was because of her. Our country and our party would be so lucky to elect more like her: clear eyed, righteous and courageous.

So to everyone who’s ever been told no, wait your turn, don’t do it this way – do it anyway. And if you’re going to do it, make sure you want it with every last ounce of your being, so you pour every last bit of effort into it. 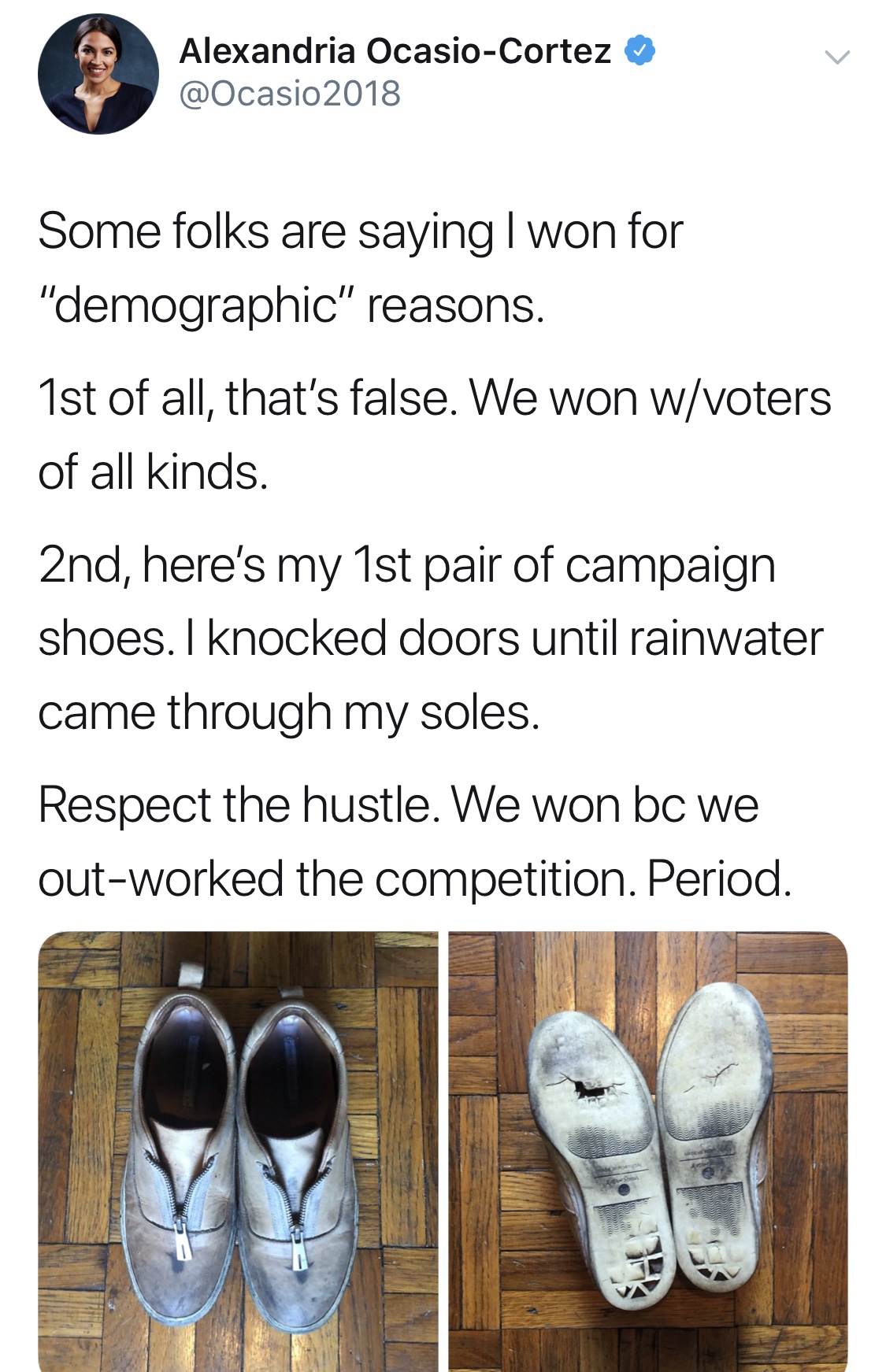 *Van is the voter access file that every candidate has the ability to purchase. MiniVan is an app that allows you to access this information from your phone.